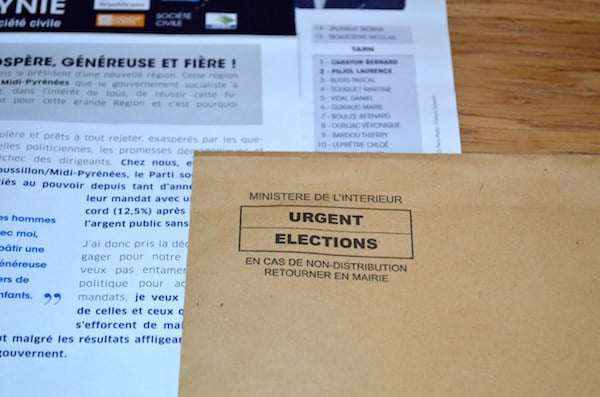 On Sunday December 6th, France entered its first round of elections to select a regional government for a five-year term. This is the first time that France is voting to elect governments of the thirteen newly formed regions. This article provides an overview to understanding the process and relevance of regional elections in France.

How do regional elections work?

Historically, France has been divided up into twenty-two regions. Here in the Languedoc Roussillon, our region is now combined with Midi Pyrenees. This change means the the regional capital is now Toulouse instead of Montpellier. Responsibilities of the regional government include economic development, tourism, employment, and rural transportation among others. These regional elections, however, are also a very important indicator of a shift to the Right in light of recent terrorist attacks and the rise of the National Front.

My husband, currently the only eligible voter in our household¹, had his homework to prepare. He, like the other 44.6 million electors² received a packet from the Minister of the Interior containing information on each of the ten lists of candidates up for election. Essentially, voters are choosing among groups of candidates of which the leader is pre-selected. Each region is assigned a different number of members on the list, depending on population. Here in the Languedoc we select among lists of 184 members. The head/leader of each group is the regional Presidential hopeful.

Each campaign flyer provides a short description of the party’s program, some facts, figures, graphs, calendars and most importantly, slogans! “Vote for your values” for one and “defending traditional values” for another. One claims to be the “up and coming party” while another is working for “the common good”. Although France might seem like a traditional two-party system, you’ll actually find dozens of parties ranging from far left to extreme right. 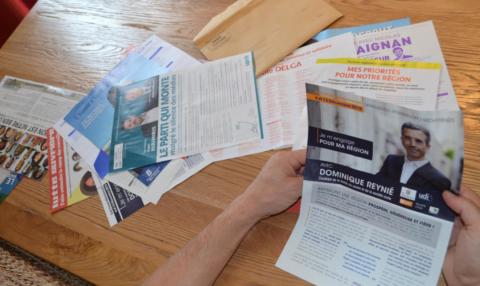 Elections are always held on Sundays, making it easier for everyone to vote. Polls are open from 8am to 6pm or 8 pm depending on the size of the town. At the closing of the 1st round, if a list receives 50% + one vote, they are automatically elected and there’s no second round. However if this is not the case, each candidate who receive at least 10% of the votes are qualified for a 2nd round of voting scheduled one week later. In our little village of 1080 souls, 59.9% ³ of the eligible population made the effort to vote in the first round.

As voters walk into the voting centers, they are asked to provide ID and to sign the voter register. After collecting a ballot for each candidate list as well as a voting envelope, the voter heads to the isoloir, which often resembles a shower stall with a curtain for privacy. He or she then selects one ballot to insert in the provided envelope and places it into the Plexiglas padlocked ballot box.

The fact that votes are still manually counted by municipal staff may seem a bit old school, but so far there have not been any scandals about punch card or electronic voting. However, to be fair, there is that one story of the town official who got caught stuffing his socks with ballots…

In the new combined region of Languedoc Roussillon-Midi Pyrénées (soon to be named Occitanie), more than half of registered voters³ turned out to vote for their regional government in the first round that ended with a triangular battle between the Socialist Party, the Republicans and the National Front. All three parties/lists will move on to the second round on December 13th.

As with most aspects of the French political system, media coverage of the elections are very strictly regulated. Breaking the news early can cost up to 75, 000 Euro in fines. On December 13th the official results of the regional elections will be announced on national television at eight pm Paris time, and not a minute earlier. Who will win? You will have to wait like the rest of us to find out.

(1) All French citizens 18 and older can register to vote while other EU citizens can vote in their municipal and European elections if they live in France.