From New York to the South of France 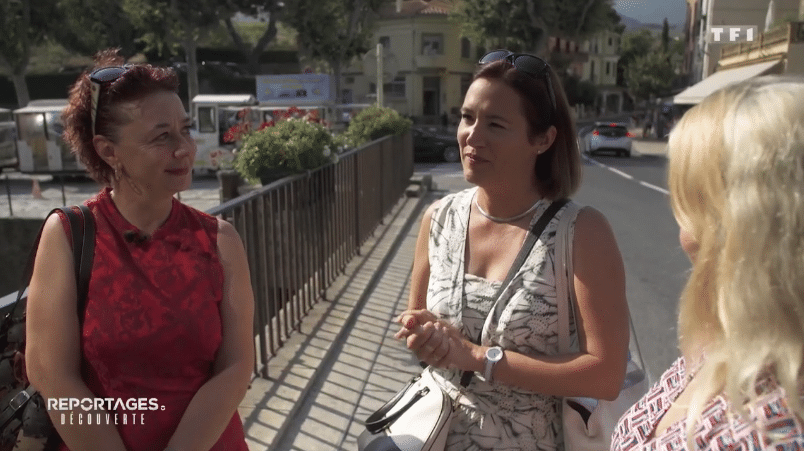 On 9 May, Dennelle was featured in a TF1 documentary on French TV following the journey of 3 different families as they relocate to France.

Back in September 2018, Jenny from New York contacted me with questions about possibly moving her small family to the South of France.

She came to Sète a couple months later with her husband, Bart and 8 year old daughter, Sophia. They were looking to retire early in a coastal town where they could walk to everything, including to the beach with their big dog. We talked about the big milestones in a plan to move over, discussed next steps and school options. Sophia was already in a French school in New York, so the transition would be the least hard on her.

They came back a few months later for a visit of the Cote Vermeille, down by the Spanish border and fell in love with the quaint coastal villages. Jenny asked Renestance to help them relocate to this part of France for the start of the 2019 school year.

It’s always an exciting time when someone arrives to live in France. Greeting them and showing them their new home is my favorite part of the job, to be honest. It’s like Christmas! It requires a lot of preparation, also like Christmas, but seeing the smiles on their faces and sparkles in their eyes makes it so fulfilling.

Can you imagine the level of excitement when a film crew is accompanying you through this occasion?! When the family of three arrived in Collioure, France in late August 2019, a producer and cameraman followed us around, filming a documentary for TF1 (a main French channel). Since they came down from Paris for the weekend, and Jenny, Bart and Sophia arrived from New York just days before the start of school, there was no time to rehearse or stage anything. Unlike the house-hunting shows you may see, the audience was seeing their new home for the first time right along with them! I was a bit nervous they wouldn’t like it, since they had only seen photos and videos of the house when we visited it on their behalf. If they hadn’t liked it, we would have been in a pickle, since there weren’t any other long-term rentals that met their criteria available in the small village.

They were looking for a home where they could walk to school, to the beach, and to the shops. Ideally, this centrally located 3 bedroom house would be furnished and have some outdoor space, a garage, and a sea view…while staying under €2000 per month. I called on my friend Catherine, who used to live in the area, and she miraculously found the rare pearl in the picturesque village of Collioure.

I did take the train down to Collioure from Montpellier a couple days before showing them the house to take care of some administrative things, like enrolling their daughter in school, and introduce them to Eve. Eve is the English-speaking local we hired to help them get settled. She was born and raised in the next village over and recently came back to the area after spending many years living in Great Britain. 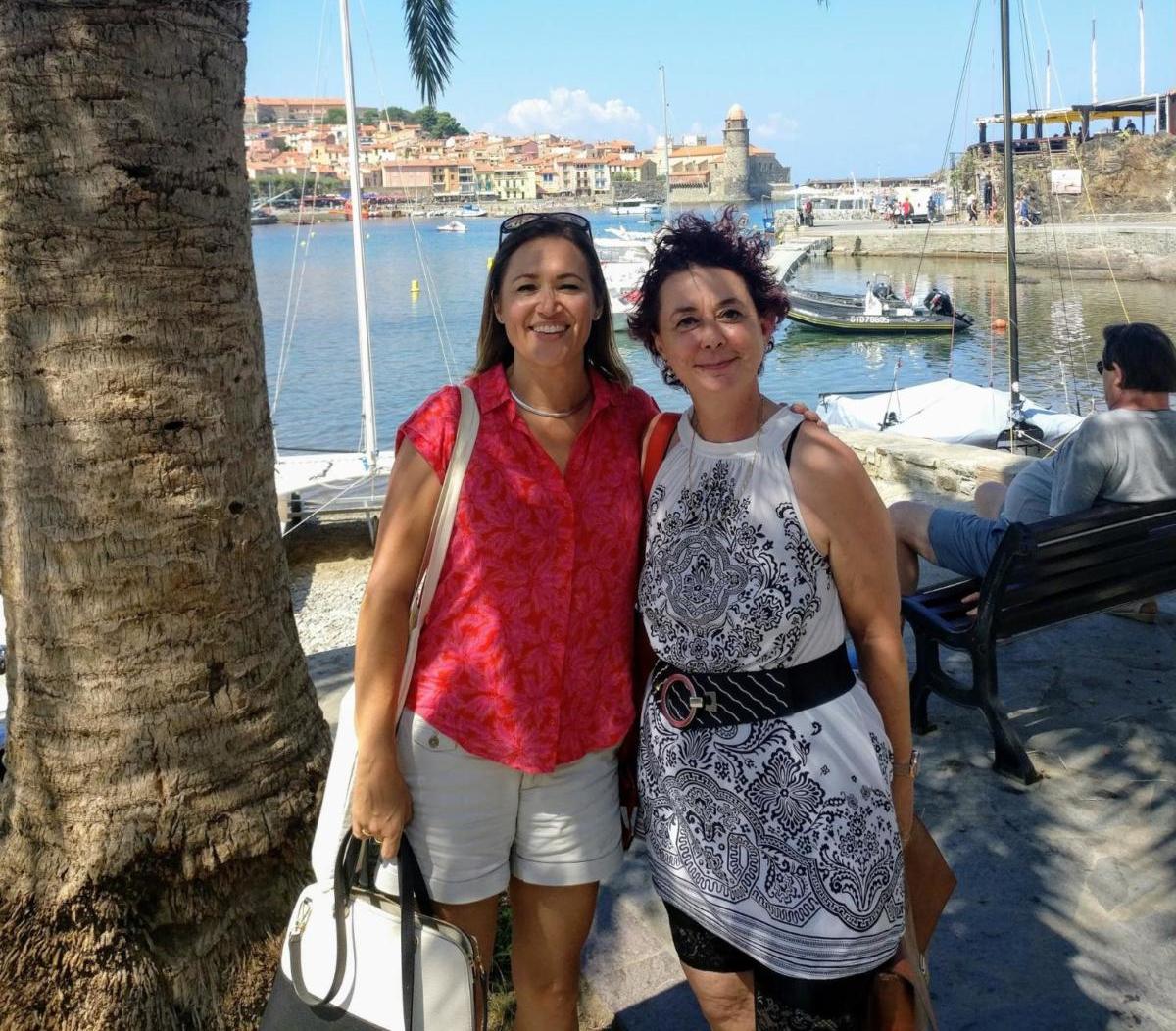 Dennelle and Eve, posing in Collioure

Neither Jenny nor Bart speak fluent French, so they took Renestance’s VIP New Nest package, which includes unlimited pre-move consulting, securing housing, and hand-holding throughout the whole first year of settling in. 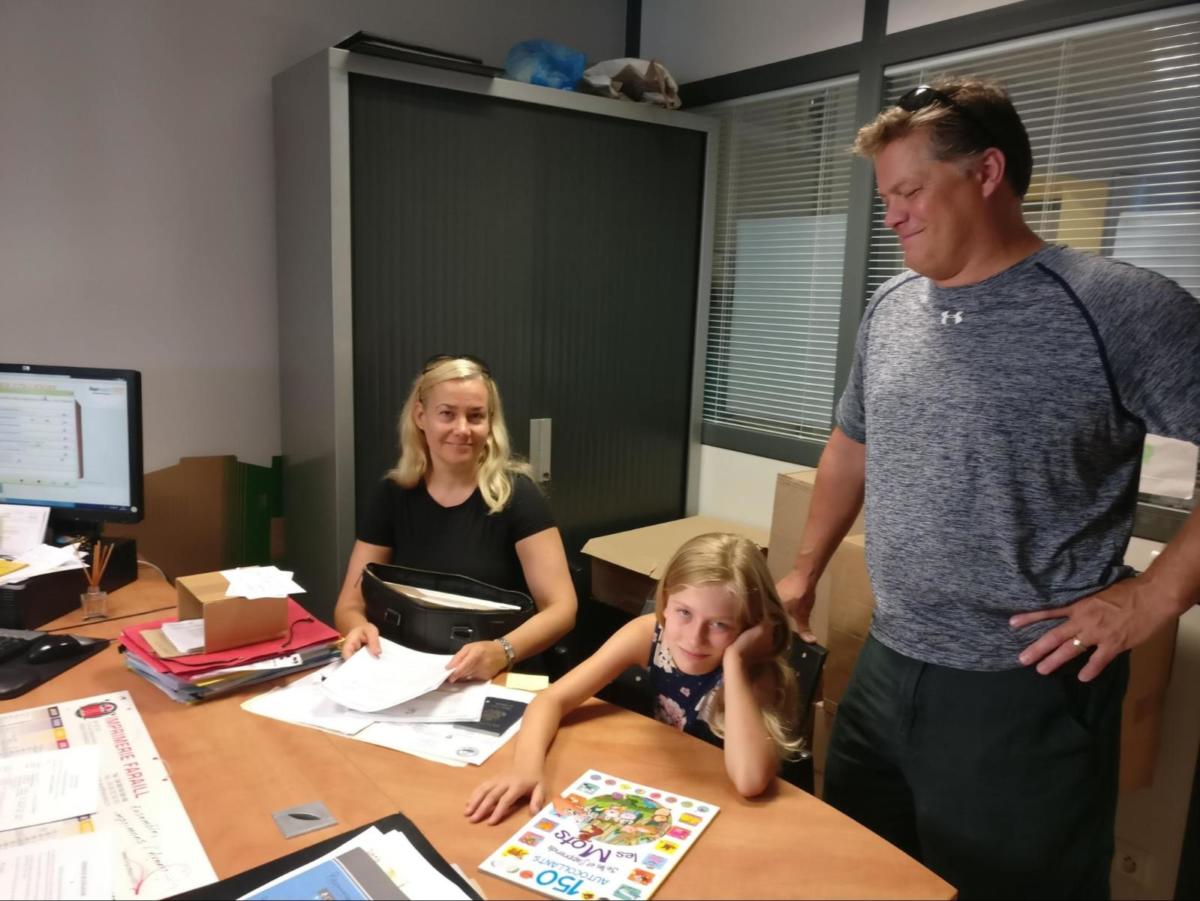 Sophia, getting registered for school

After getting Sophia all set for school, the lunch cantine, and after school care, we met Eve for a tour of Collioure’s hot spots (literally, as it was late August!). Luckily for us, it was market day, so the family got acquainted with a fixture of French life. They had a lot of questions about where to find certain things like sheets, Zumba classes, an English-speaking vet, etc. Jenny was particularly concerned about the hours for stores, the post office, and public transportation. Going from NYC, the city that never sleeps, to tiny Collioure was going to be an adjustment! 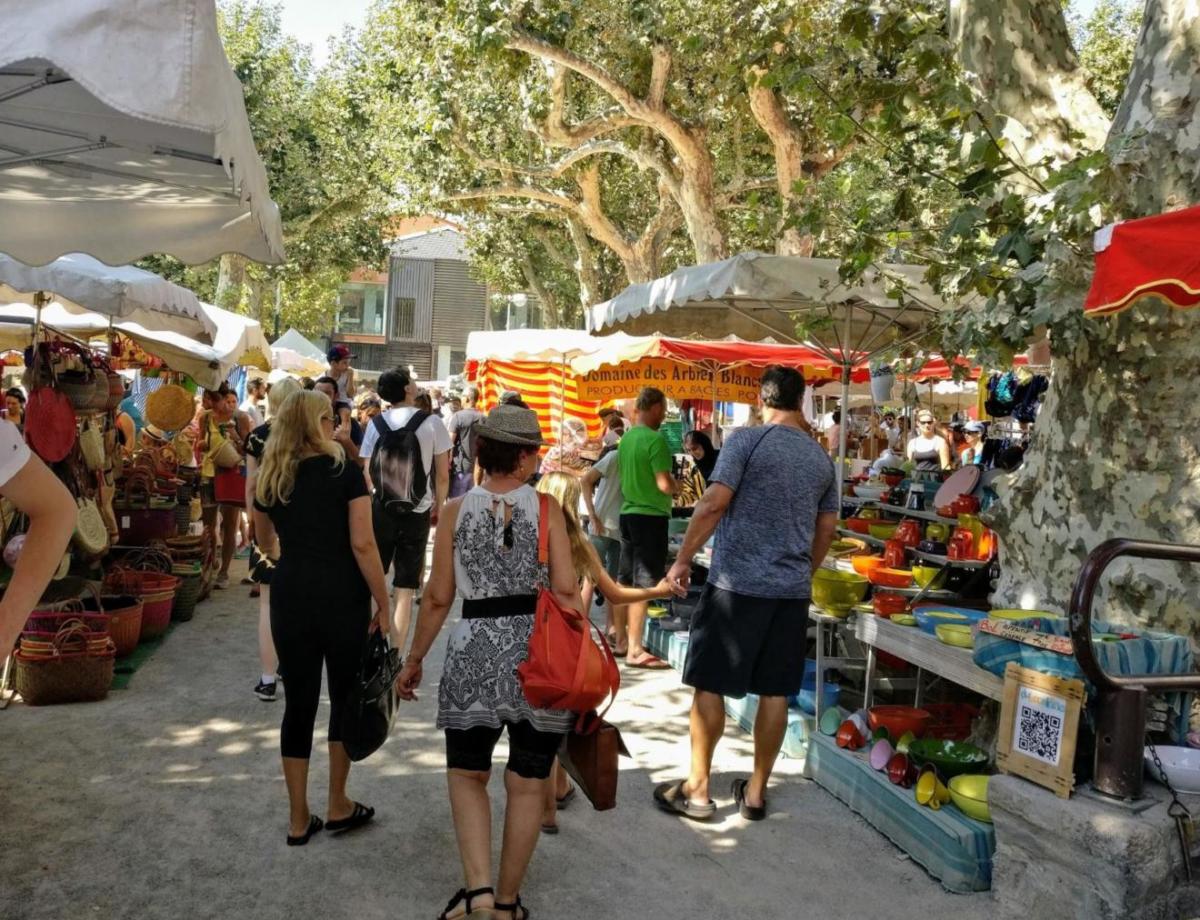 We had a delicious lunch of fresh seafood right on the sea, and discussed things like opening a bank account, getting French health insurance, finding activities for Sophia, and learning French. Then the family went back to their AirBnB, and I returned to Montpellier. We were all excited for the filming in a couple days! 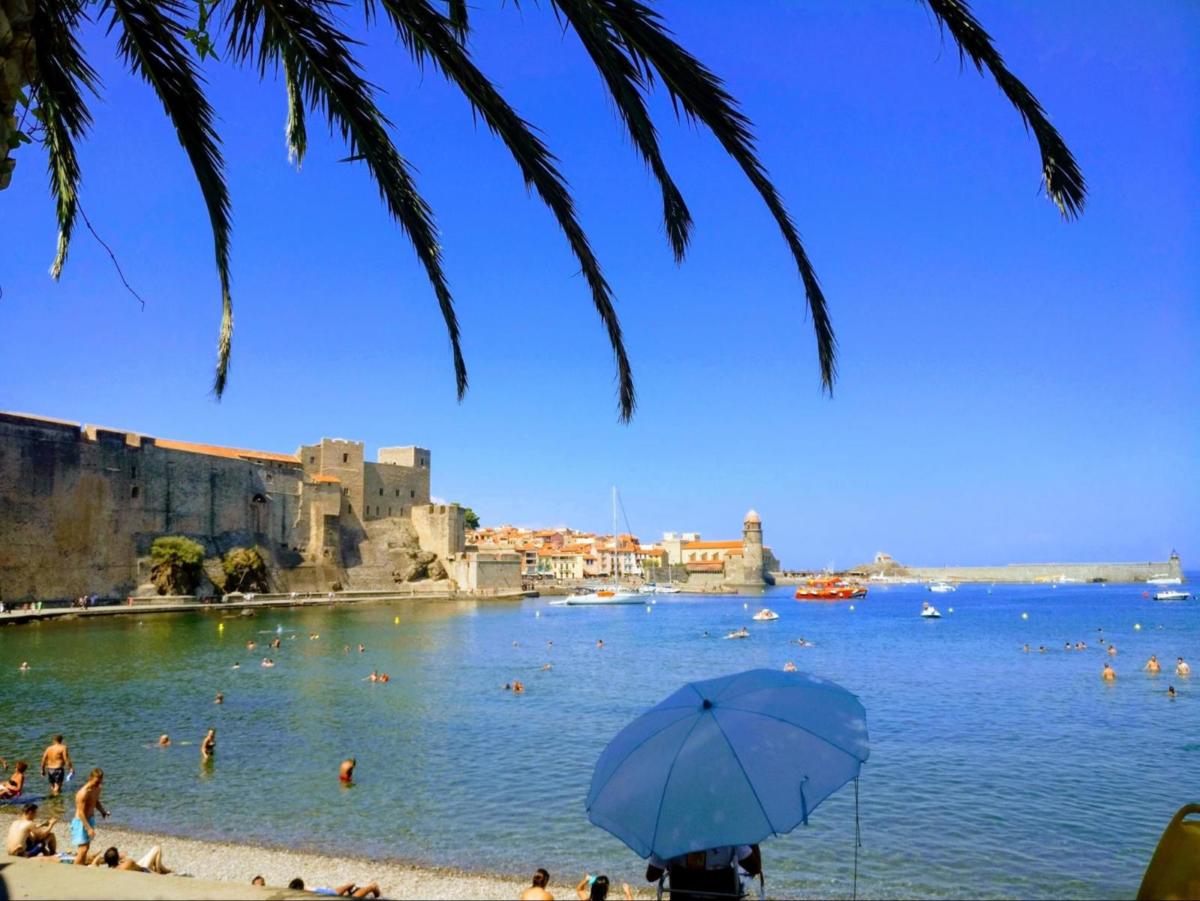 Over 200,000 people relocate to France every year, and like the families in the documentary, they each have different circumstances. Often families move for work, or advanced studies, but sometimes they come for a gap year or sabbatical and end up staying. Many Renestance clients come to retire or to set up a business. Jenny and Bart are early retirees, but with a daughter in primary school, so their circumstances don’t fit a typical mold.

For people coming from outside the EU, the first challenge is getting the right visa for what you want to do in France. The Mexican family in the show were tripped up by this and eventually had to separate so the mother could go back to Mexico and apply for a visa that would allow her to work in France. They also had trouble enrolling their children in school, because they didn’t have the required documents. It was very hard to watch them go through this anguish, and I wished they’d had Renestance’s assistance to avoid it.

On the day of the filming, we met Julie the producer and Vincent the cameraman, who wired us all up with microphones. We basically walked around the village while Julie asked us questions and we talked to each other as we normally would…except that I had to repeat some things in French, so that was a little funny. Eve took us by some local points of interest: a restaurant with original works of art by famous Fauvists, a bakery known for traditional beignets, and THE place for the local specialty of anchovies in curry spices. 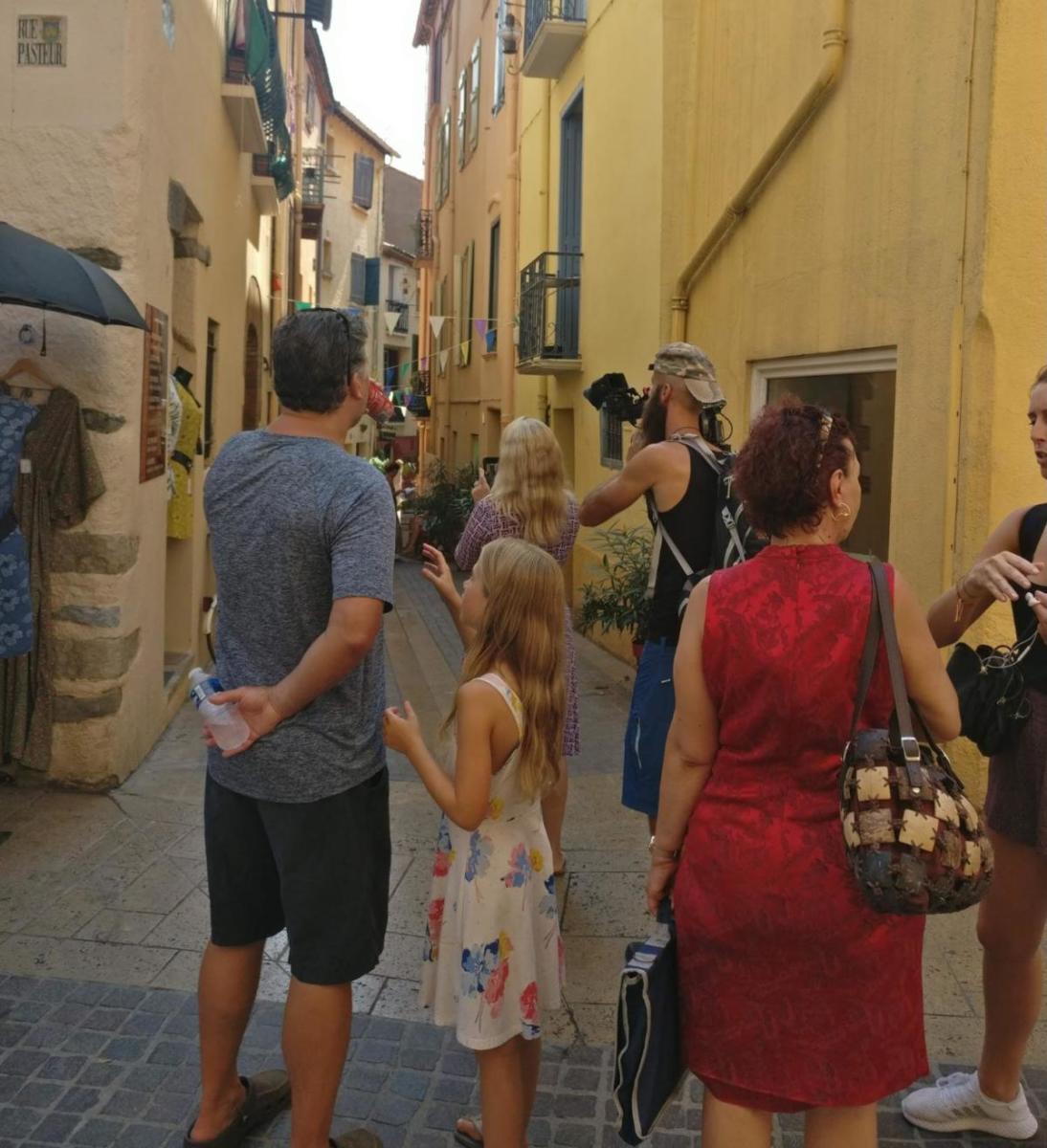 Like many villages in the South of France, Collioure has narrow streets and squares with big, leafy plane trees to keep the shade in the warm seasons. The buildings are much more colorful here than in other villages, however, hearkening back to its artistic past. Picasso, Matisse and Dali are just some of the famous painters who stayed in Collioure. As our good luck would have it, we stumbled upon a group of locals performing the Sardane, a traditional Catalan dance. 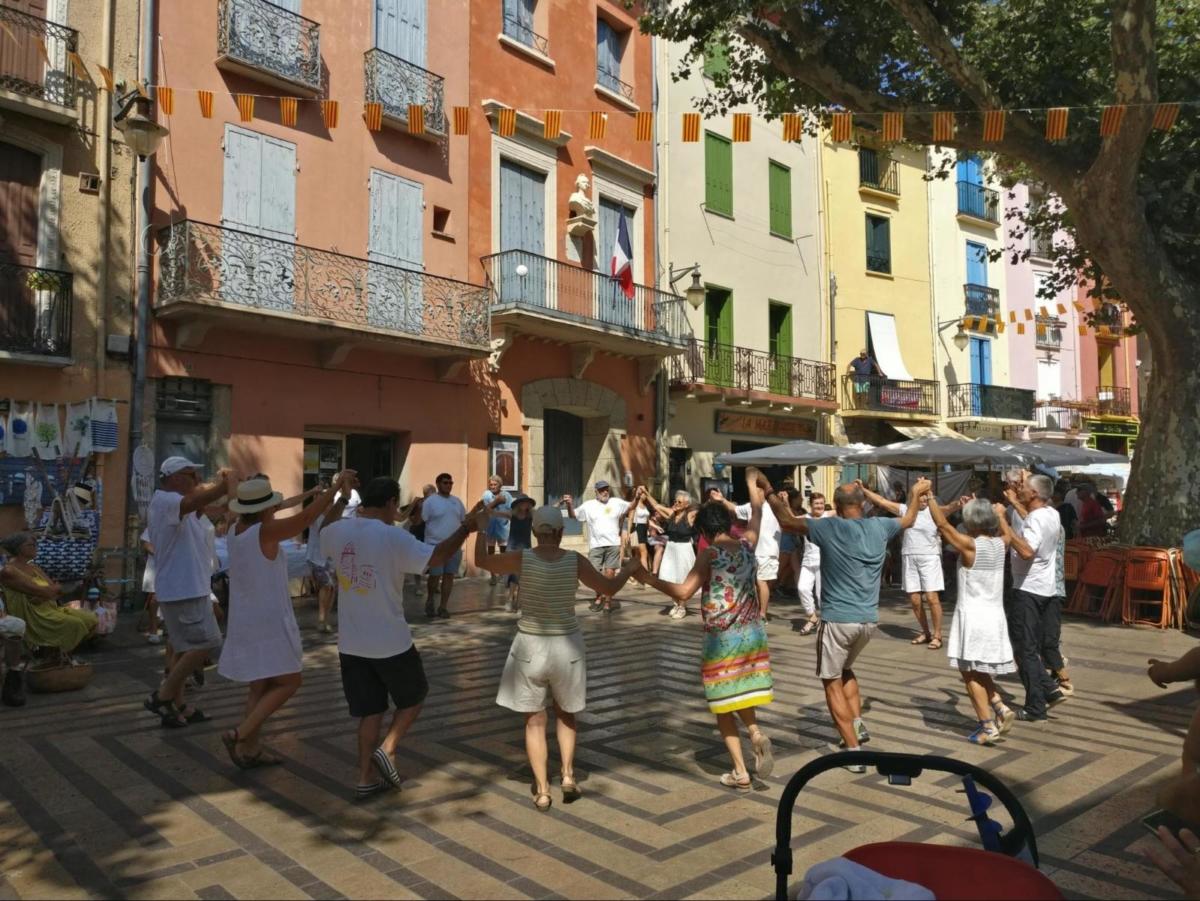 The Sardane is a traditional Catalan dance

We had an appointment with the rental agent at 2 pm to see the house, do the walk-through and get the keys. They were surprised at how much smaller the appliances were than in the US, and I had to show Jenny how the top-loading washing machine worked. As for most Americans, the lack of a tumble dryer or air conditioning was difficult to fathom. But when they saw the view of Collioure’s azure cove from the bedroom windows and the rooftop terrace, none of that seemed to matter anymore.

We left them to unpack their bags and get acquainted with the neighborhood, which was a short walk to the beach and the shops, just as they ordered. 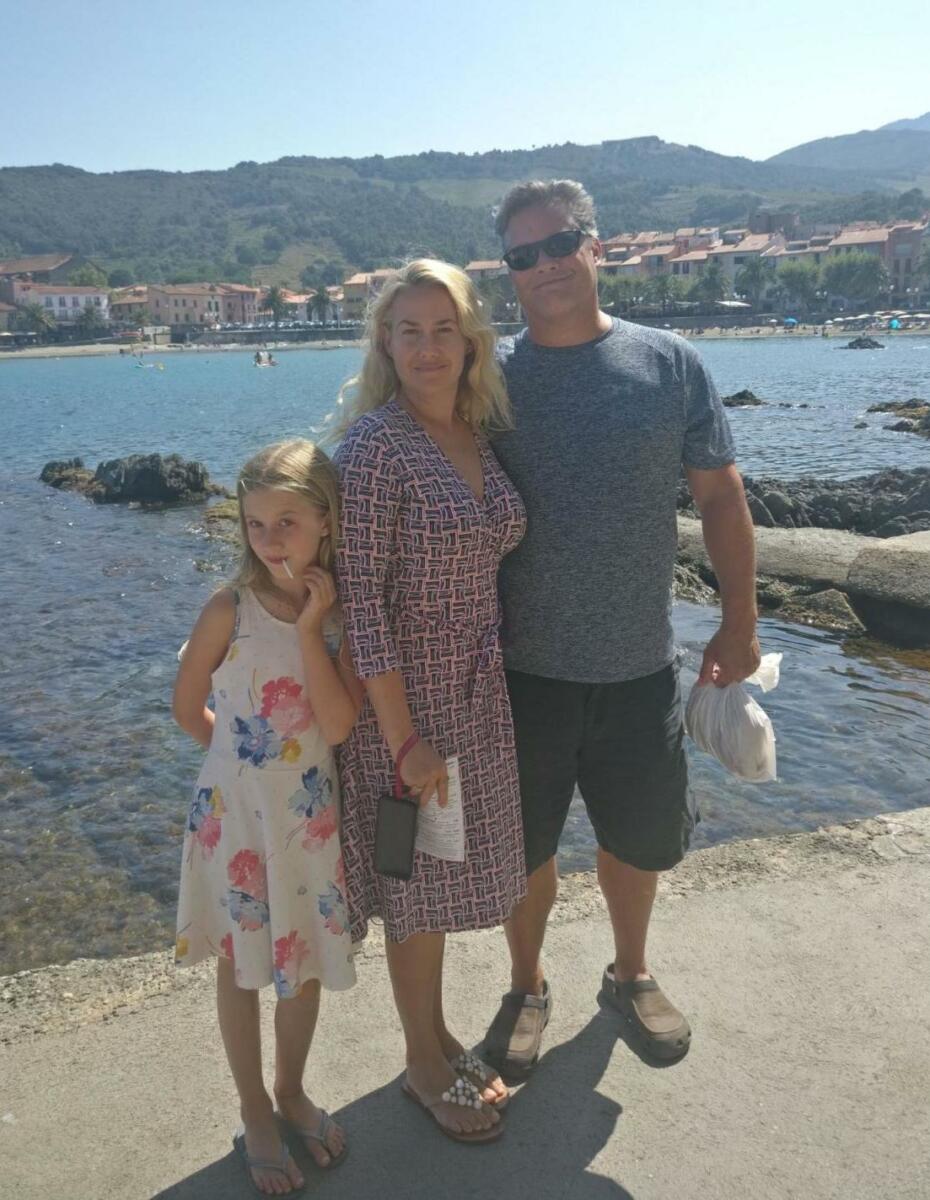 Sophia, Jenny and Bart in Collioure