One of the favorite past-times for residents of Languedoc is walking. Sunday afternoons, after a leisurely meal, you will find paths full of families walking off their feast. More intrepid hikers enjoy the well marked GR trails (Grandes Randonnées) that criss-cross France, all 180,000 km of them! Others seek out a longer-term challenge, which may lead them to the Camino de Santiago, also known as “The Way of Saint James”. This pilgrimage to the Cathedral of Santiago de Compostela in Galicia, Spain (on the UNESCO world heritage list) attracts individuals from all over the world. While the Camino is well-known for traversing Spain, it may surprise some to learn there are actually many Camino routes throughout France. Other routes even begin in Italy, Germany, and Switzerland. In this week’s post, we hear from three guest bloggers about their experiences on the Camino-– first from Eva, as an onlooker, second from Christine, as a pilgrim in Spain, and third from Mary, who tackled the French Camino this year. Whether you are a casual stroller or a back-country hiker, we hope you enjoy these snippets about walking in France.

Eva’s Story: A Gite Owner along the Camino de Santiago

We begin our journey with Eva Hamori, regular Renestance blogger. As a gite owner, Eva has met and hosted a steady steam “pilgrims” passing through her village of Capestang en route. Eva explains,

“I have packed leftovers for students walking the route with little money, lentils and hummus for a group of Indian Buddhists who couldn’t find good vegetarian food on route, and sandwiches for people whom I wished would stay for more conversation. Tears have streamed down my face both from hearing tragic tales of heartache, gutwrencher love stories and terminal illness, but also during robust bursts of laughter sharing funny stories over a glass of Languedoc wine…”

Inspired by these walkers, Eva set out to research the French camino. She writes,

“The French route, called the Camino Frances, starts at St. Jean Pied de Port on the French side of the Pyrenees and finishes 780 km later in Santiago de Compostela, Spain. The route is broken down into 32 stages with accommodations and food easily accessible.

The Village of Capestang is now officially part of the Santiago de Compostela on the route from Montpellier to Toulouse, called ‘The Way of the Foothills’ (La Voie des Piémonts) which then enters Northern Spain through the bordering Pyrenees Mountains. Our town hall has just received our Pilgrimage stamp to show proof of the pilgrim’s passage through our village. This entitles travellers to stay in “Albergue’ ‘Pilgrim Only” hostels on route, and also to eat special pilgrim meals at some local restaurants. This region is a beautiful leg of the walk offering 100 hours over 479 km through breathtaking scenery of the Mediterranean Sea, walking over rolling vine covered hills, and along the Canal du Midi straight across France.”

You can read more about the history of the camino and find resources on Eva’s article, “Santiago de Compostela Way.” Eva plans to walk the Camino herself some day, following in the footsteps of other Languedoc residents Christine and Mary.

Christine’s Story: Hooked on the Camino

Like Eva, Christine Marshall had met many pilgrims passing through her area in the Haut Languedoc. In 2014, Christine decided to do a portion of it herself. She begins her travel diaries with her decision-making process,

“We would walk into Santiago but where to start? As this was a spur of the moment decision, we found we didn’t have sufficient time to walk 100kms, the minimum required to obtain your Pilgrim’s certificate, but that was not a problem. If we enjoyed the experience, we would no doubt walk other parts of the Camino and gain our certificate another time. Little did we know what a drug walking the Camino would turn out to be!

We set aside five days for walking and four days for travelling. After examining maps and checking terrain, Palas de Rei seemed a good point to start. Our guidebooks implied it was 66.5kms from there to Santiago. Fine on paper but the 66.5kms overlooked additional walking distances to our hotels and the hilly ups and downs! ‘Hotels!’ I hear you say. Yes, we decided to copy Charlemagne and add a bit of luxury to our walk. I am afraid to say the hostels and albergues lining the route didn’t hold any attraction at this point in our lives.

Then there was the training or lack of it! We did intend to train beforehand but other things got in the way. Nonetheless we were relatively fit, or so we thought. We not only walked our dog twice a day but we were also part of a walking group. We should be OK as the longest day (on paper) would cover 18kms and we had all day to do this. Hindsight is a wonderful thing!

Three of us left the Hérault department one Friday in September 2014 in bright sunshine, heading for a Spanish border town just outside San Sebastian, half-way to Palas de Rei, which is some 1,260kms from home.”

This is just the beginning! Christine deftly documents her progress in a series of articles posted on the Hérault English Church. 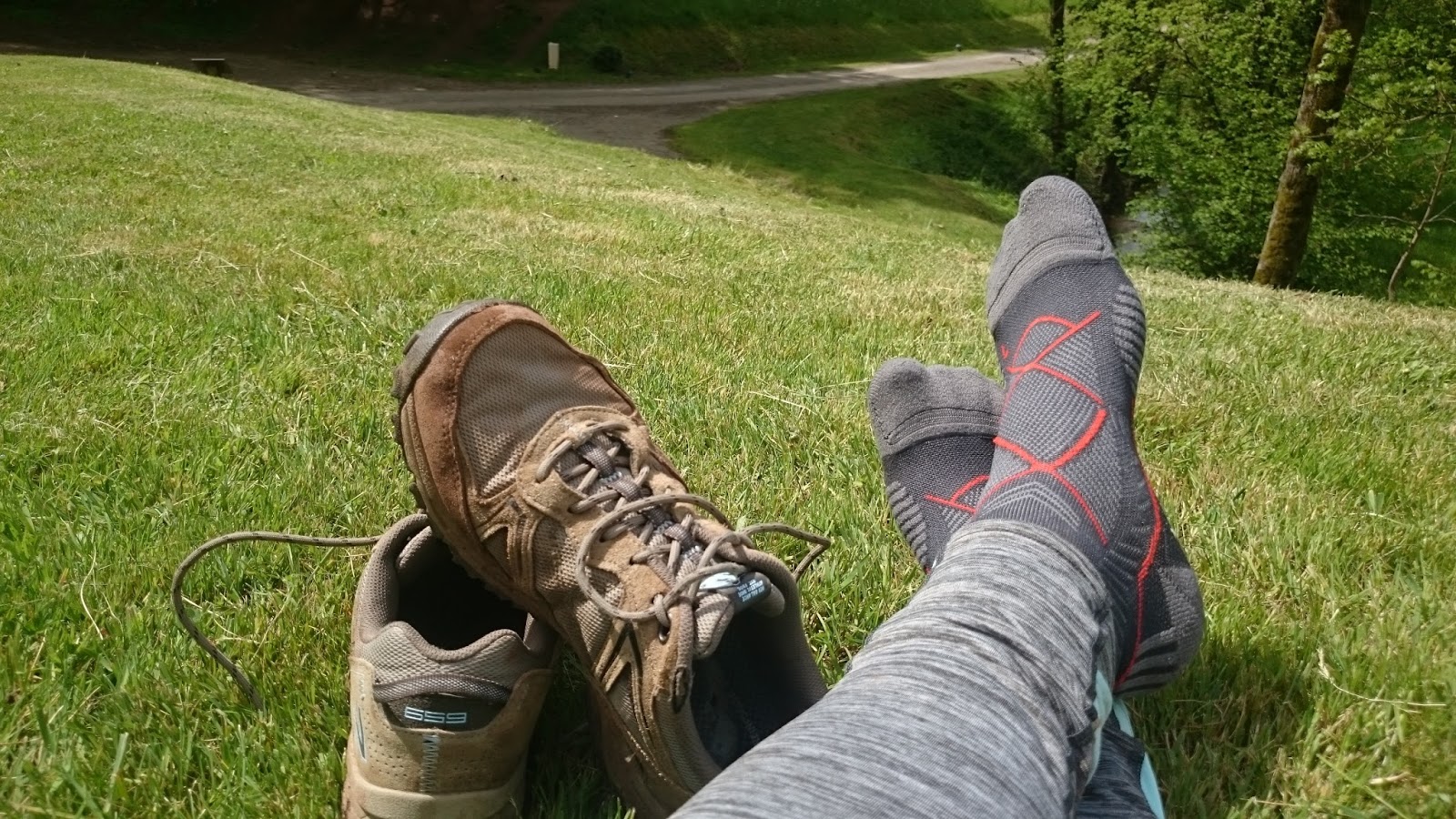 A well-deserved break on the Camino. Photo by Mary Faigle

Mary first walked the Spanish Camino last year. Like Christine, she was quickly hooked, and this year decided to take on the French section. She writes below about the journey from Le Puy to Figeac as a “Movable Retreat” for body and soul.

Walking in the beautiful countryside and forests from Le Puy to Figeac on the Camino Via Podiensis was one of the most incredible and trying experiences in my life. This stage of the Camino in France is considered one of the most beautiful, yet physically challenging which is actually why I chose to walk it…and to walk alone and not in a group. Legend has it that the first pilgrim to walk this route was the Bishop of Le Puy in 950 CE. Pilgrims at that time were said to have walked around 60 kilometers a day. This made me feel lazy and soft when I was pretty exhausted after 25 kilometers. I often thought about what he would have seen that I was seeing all these centuries later…the huge rock formations, the rivers, the mountains we crossed…

Every day on the Camino was only full of strength and success…I started walking in the morning and I always arrived at the gite or auberge where I was to sleep that night with no doubt or problems that could not be resolved. Every day was a neat tidy and beautiful package all tied up and completed. 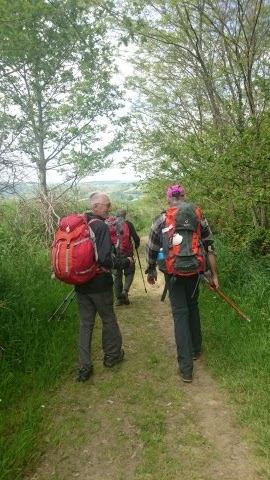 Along the Camino (photo by Mary Faigle)

There were many trials and tests of mental and physical grit, but I always succeeded. No one controlled my day or critiqued my form or my choices or my methods. Every decision, every step was mine and mine alone to own, to take responsibility for, to celebrate.

At the end of each day, pilgrims shared their struggles, successes and war stories…celebrating each day the fact that we all made it through the difficulties and length of the walk. When someone had a serious issue, we all gathered and supported that person and cheered them on to muster on or to pause and care for their needs. We drew courage from others who walked the same path as us, but with seemingly more challenges… As I faced the mountains that day, it occurred to me that we all have baggage and burdens, but if we just face each step one at a time, we can handle any challenge that is put in front of us. Our biggest obstacle is our self doubt.”

You can read the full article and follow Mary’s inspiring progress on her blog.

All three of our bloggers have included more information and resources about the Camino at their websites. They recommend the websites as a starting point. If you need assistance along the way, don’t hesitate to reach out to Renestance for more information.