The Beauty of Southern French Fountains 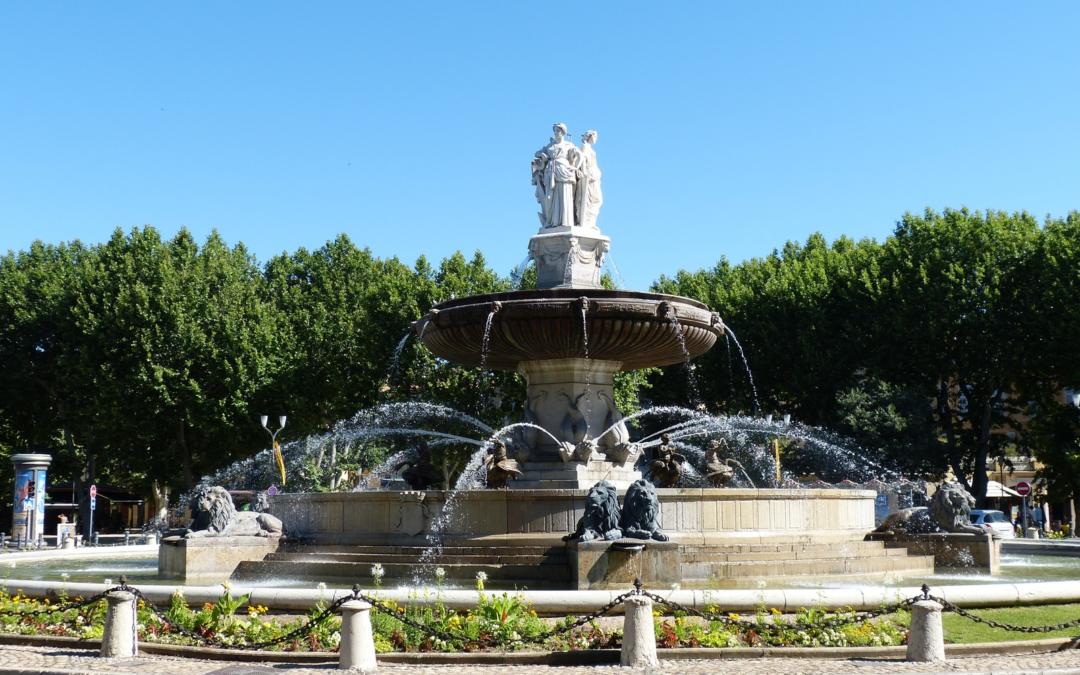 Gazing out of a window during a yoga class in Aix-en-Provence, I noticed a mural depicting a stone well. The picture looked like it was from a children’s story book — wells like this don’t exist in my country, Australia. Yet in France they are real — and we see many quaint water features in almost every village and town in southern France. There are moss covered fountains in village squares, surrounded by plane trees, and small fountains and lavoirs in side streets. And I wondered — is there an interesting history behind the development of the fountain in France?
This led me to discover that some of the earliest fountains in France were created in the Provence and Languedoc regions.

The Romans built the first fountains in France in the 1st-2nd centuries A.D. in Glanum, near St Remy de Provence. There are other notable examples in Vaison-la-Romaine and Nîmes.

During my research I remembered that water is a symbol of power. Man’s dominance over nature. See how the fountains of Versailles display a king’s power most sublimely. Fountains were often placed in a central square near the church to show the town’s wealth and prestige. Kingdoms fought over water as no settlement could exist without it. Water is life and is always a prominent feature in religious paintings depicting paradise.

The history of southern France is linked to water. The Romans built canals, aqueducts and irrigation systems throughout the semi-arid South of France to channel water from distant lakes, rivers and mountains. Once the water had arrived to a settlement, it went into lead pipes directing it to street fountains or to Roman baths and villas. Street fountains provided drinking water to both animals and humans.

During the 5th century A.D., with the invasion of the Barbarian tribes, the system of government broke down. French cities did not have reliable water distribution again until the 18th century. Water borne disease was common, like the terrible cholera epidemic in 1884 in the Bouches-du-Rhône.

During the Middle Ages most fountains fell into disrepair.
Fountains existed only in literature or preserved in palace gardens and monasteries. Some of the oldest surviving Medieval fountains are the Lavabos found in Provence and the Languedoc. They were used for ritual washing, the oldest dating from the 12th century in Le Thonnet Abbey in Provence. The oldest cloister type fountain is located in the Priory of St-Michel de Grandmont in the Languedoc.

From the 1550’s, during the Italian Renaissance and the later Baroque period, fountain design became more extravagant. They were artistic and engineering marvels where sculpture and decoration became as important as the water they supplied. Palaces and châteaux in southern France embraced this movement as a symbol of wealth and power. An example are the fountains located in the Jardins d’Albertas in Provence. However northern France contains the majority of the country’s ornate water features.

Many fountains were located just outside the entrance to a village at a spring connected to an underground gallery. The earliest fountains in this region were the Roman street fountains. These are free standing stone blocks connected to lead pipes beneath the street.

French village fountains were often built on the same site as Roman fountains and evolved into several styles. The most common types being wall, barrel and bulb style fountains along with the lavoirs or washing basins. This same basic design for fountains was used from medieval times to the 19th Century.

Wall fountains were located at a spring. Water poured out of a spout usually decorated with stone carvings in the form of human, animal or mythical heads. The barrel and bulb fountains were more prevalent in the 16th century. These were free standing fountains and usually located in the centre of a French square. They are circular stone basins and differ slightly in the way they siphon the water.

Lavoirs were in every village and were the traditional way of washing clothes. Contrary to popular belief, the lavoirs were used only to rinse clothes; the actual washing was done at home. The lavoir was usually a roofed structure, which contained several long rectangular basins. There were also inclined stones for rinsing clothes, wooden beams to hang them, and some had chimneys for making cinders, used as a whitening agent. Lavoirs also played an interesting role in a town’s social fabric, as they were communal areas for women. Special codes of conduct were developed for behaviour at such places. 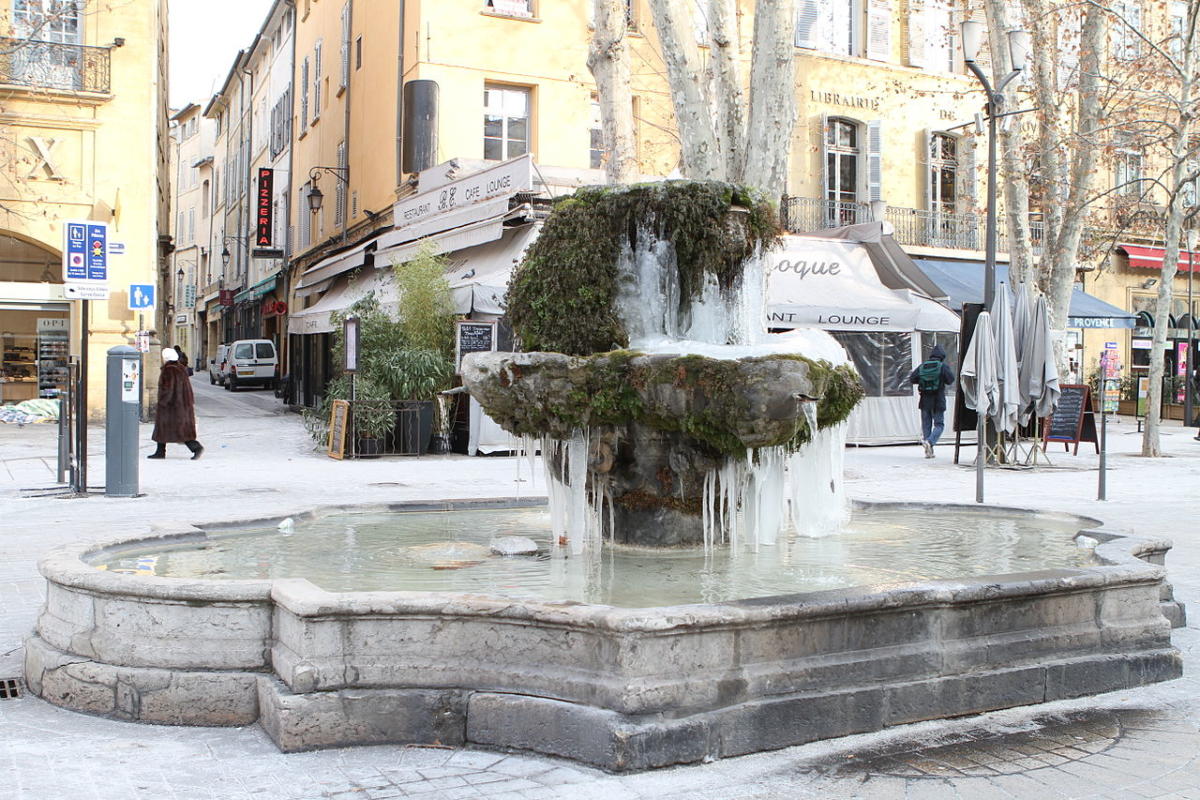 Aix — a microcosm of fountain design

It is impossible to describe the history of fountains in southern France without referring to Aix-en-Provence. The Romans chose the site for its thermal springs. Aix has over 40 fountains within the town and a constant supply of water, thanks to the development of the Zola dam and Verdon canal. Aix contains fountains from almost every era. Some of the more notable fountains include: the 15th Century Espéluque fountain; the highly ornate 1860’s Rotunda fountain, and; many beautiful sculpted works like Chastel’s gargoyle fountain. Also well-known is the beautiful baroque fountain of the four dolphins constructed in 1667 in the Mazarin district and the mossy, hot water fountains along the principal boulevard, Cours Mirabeau.

The fountains found in the South of France, with their distinct stone, simple forms and surrounded by plane trees, is iconic of the French village. From the fountain’s humble Roman roots as a simple stone block, through their preservation in medieval times as lavabos in monasteries, to their evolution as ornate structures, fountains in the South are as much about social and cultural history as about utilitarian necessity.

For me, there is nothing like the sheer joy in finding a simple yet beautiful stone fountain in a village backstreet in southern France.

Laurence was born in Alès. She left after her studies to be an au pair in London. She visited Glasgow for a week end and stayed for 2 years. After returning to Montpellier for five years, she finally settled back in Bracknell, UK, where she was working in an IT company. She came back to France when her twins were toddlers, created LE SUN in 2006, and since then has been reveling in discovering her region, the Occitanie.

All articles by: Laurence Boxall