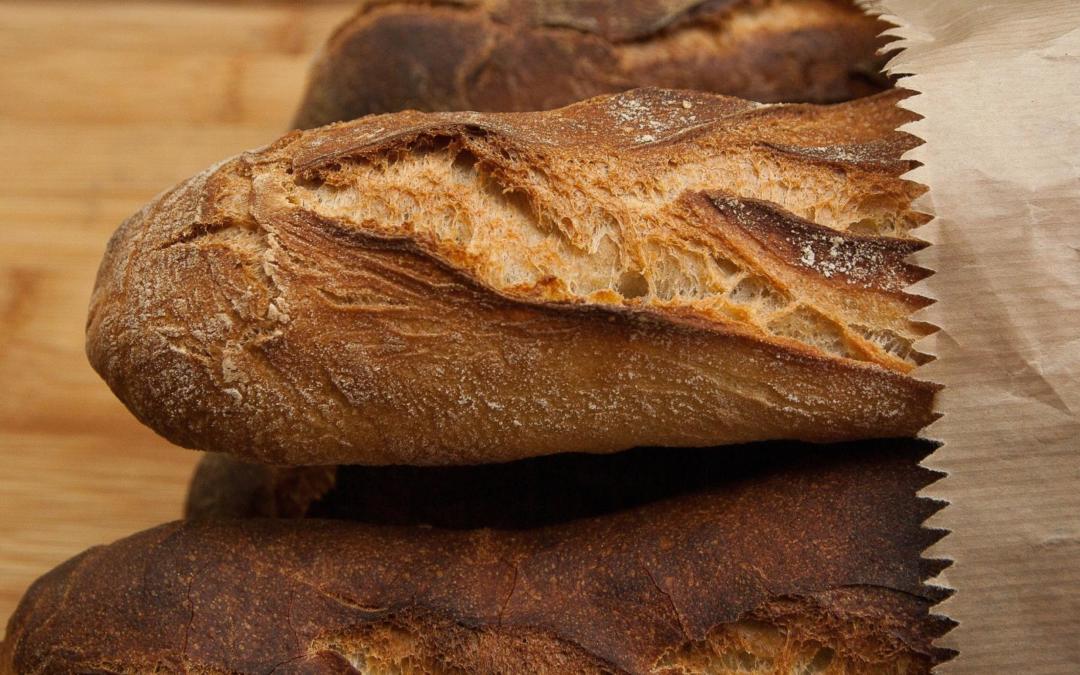 There are a few icons that immediately identify as ‘French’ and one of those is most certainly a baguette! A stick of baked dough is at the very heart of the national culture: France has the highest density of bakeries in the world, and approximately ten million baguettes are sold in France every year.

Long loaves of bread have been baked in France since the reign of Louis XVI. The word baguette means a stick or baton. In 1920, a law was introduced restricting the baking hours to 4am-10pm, making it difficult to produce enough fresh bread in the mornings. A faster-baking solution was needed, hence the shape of the baguette we have today, which allows the maximum amount of dough to be cooked whilst also producing a thick crust.

There are baguette rules too, a standard baguette has a diameter of about 5-6 cm and its length is 55-65 cm.

Bread is such an important part of French cuisine/culture, laws up until 2014 prevented all bakers in Paris taking summer holidays at the same time.

And every village in France must sell bread. If there is no bakery in a village – a store, post office or sometimes even a van, will display a “dépôt de pain” sign, signifying that bread is brought in and sold from somewhere else.

In 1993, the French government passed a new law called the Décret Pain. The law states that traditional baguettes have to be made on the premises where they’re sold and can only be made with four ingredients: wheat flour, water, salt and yeast. They can’t be frozen at any stage or contain additives or preservatives – which also means they go stale within 24 hours.

If they ask how you like your bread cooked, say “bien cuite” for well-cooked and crusty and “pas trop cuite” for under-cooked and soft.

Baguettes usually cost between 1 euro and 1.30 euros. Boulangeries are busy places and may not have change for large bank notes, so it’s polite to try to pay with close to the exact amount.

Apart from baguettes, other French bread types include the boule (ball), couronne (ring shaped), the flûte (same length as a baguette, but either twice the width or half, depending on the region), the batard (a shorter baguette) and the ficelle (long, thin loaf). Un pain is made with the same dough as a baguette but will be a different shape. Pain de mie is a rectangular loaf of sliced white bread, like the kind you would find in a store.

Baguettes are usually sold in paper bags so you can carry it without touching the crust. If you get the urge to nibble the end of the loaf on the way home – and who can resist? – the heel is called le quignon in the southern half of the country and le croûton in the northern half.

At home, baguettes are very rarely cut on a chopping board. You will usually see a French person cutting them ‘in the air’ or tearing pieces off by hand! If pieces are cut, they are usually about 5 cm wide. Bread is served alongside savory dishes and never on side plates. Many newcomers are surprised to see it placed directly on the table to the upper right-hand side of the dinner plate.

Bread expressions in the French language

Avoir du pain sur la planche (to have bread on the plank)
This means you have a lot of things to do, a lot of work. In the 19th century bakers used to prepare and stock bread on a plank so it meant to have enough (bread) to survive in the future.

Pour une bouchée de pain (for a mouthful of bread)
In the 17th century bread was inexpensive so this expression implies buying something very cheap, worth almost nothing.

Ne pas manger de ce pain là (to not eat this kind of bread)
‘Je ne mange pas de ce pain là’, is what you can say when you choose not to participate in something you consider immoral.

Ça ne mange pas de pain (this does not eat bread)
This means it doesn’t require much effort, cost or risk. In the middle ages, bread represented a large part of the family food budget.

Boy, writing this piece has made me hungry! I feel lucky to have fresh French bread daily, as it’s the main thing I miss when traveling. Hopefully you can go grab a baguette right now, too.