The Secret is Getting Out – Gastronomic Delights 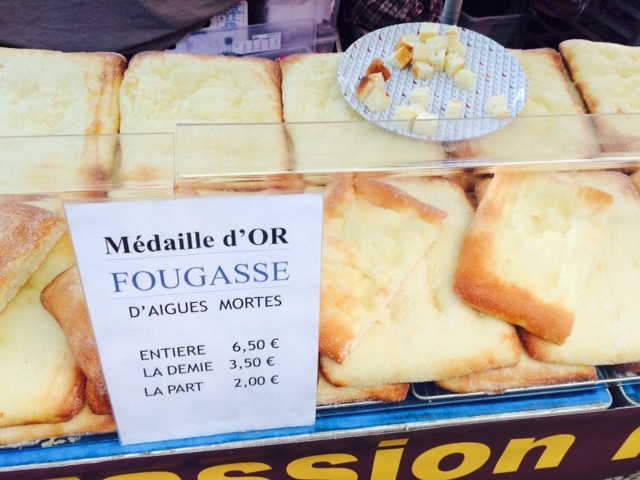 Those of us who live here in the Languedoc have long enjoyed the gastronomic delights of the region. While our neighbors to the East and North have traditionally received greater acclaim for wine and culinary repertoire, the secret is getting out. In this week’s post, we have a guest blog from Annabelle Hood of Foodepedia where this article was originally published. Read away, but prep your taste buds first!

“France’s southwest Languedoc-Roussillon is one of the world’s biggest wine producers; chefs scooped 26 Michelin stars this year in the region alone, and its famous oysters are exported to China’s elite. So move over Provence, says Annabelle Hood, and let your sibling take some credit”

I’m being jostled on all sides, but barely notice as tongue alchemy besieges my senses in the middle of Uzès’ town square market. A solitary, squidgey piece of Fougasse bread forces me to stop and savour its subtle nostalgia: “C’est quoi le goût madame?” I ask the stall’s vendor: Mais oui! …orange blossom.

I leave the market in a dopamine daze, forgetting to buy the scarf I’d coveted just moments before. That, mes amis, is the heady impact of award-winning French market fare.

Our three days in the South of France’s Languedoc-Roussillon region (the 200km-wide south-west coastal land spanning Spanish Catalonia to the west and better-known Provence to the East) turn out to be a girth-loosening whirl. We begin 40miles north-east of Montpellier, in Uzès; surely the Frenchest town in France, with narrow cobbled streets, dappled squares, artisanal galleries and boutiques selling local pottery, olives, Lavender and fine cotton cloth. 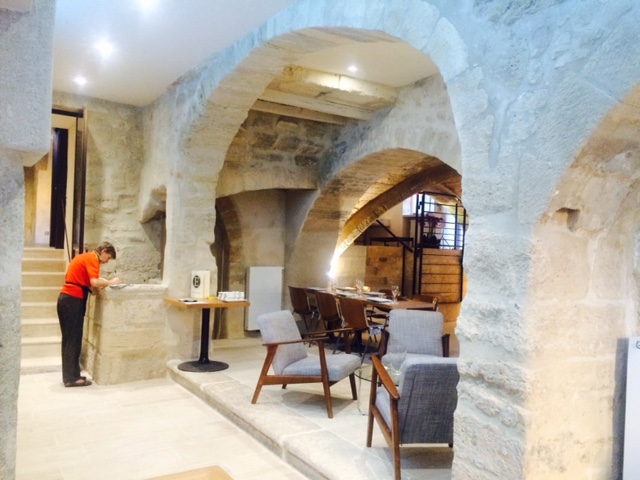 Opposite the town’s cathedral is the newly reopened Hôtel Entraigues, a building sensitively renovated; its showstopper suites facing the pool and town’s medieval cathedral. That night we dine in Entraigues’ open-plan limestone vaulted bar and restaurant. Chef Axel Bachelard’s relaxed menu features radish sauce-topped charred mackerel blinis, langoustines rolls with grilled leeks and a caper sauce, Nîmes ‘Les Halles’ cheeses, and a richly zesty ‘Lemon-Lover’ crumble sorbet for pudding. He changes the menu every 3-4 days depending what he buys from the town’s Wednesday and Saturday markets that attract gourmets from neighbouring villages and beyond.

Earlier, we’d piled in to the kitchen to watch the charismatic chef conconct a risotto, then deftly roll duck livers (“duck fat has more flavour than goose”) onto a straw Maki mat, seasoning them with a pinch of Piment Espelatte chili powder and Réglisse (liquorice powder), before twisting them sausage-like in cellophane and foil.

While watching him make the smoothest mash I’ve tasted, I realised what I’ve being doing wrong: Using dud spuds (“use firm potatoes”), chucking them into boiling water (“Always start with cold water and salt; it’s easier to sieve through the strainer”), adding cream (“jamais! Just good butter”) and not cooking them for the optimal length of time. So what is the optimum time, Axel? He stabs at a bubbling spud: “Je ne sais pas – you just get ze feeling.” Oh right – so lumpy mash it is then. 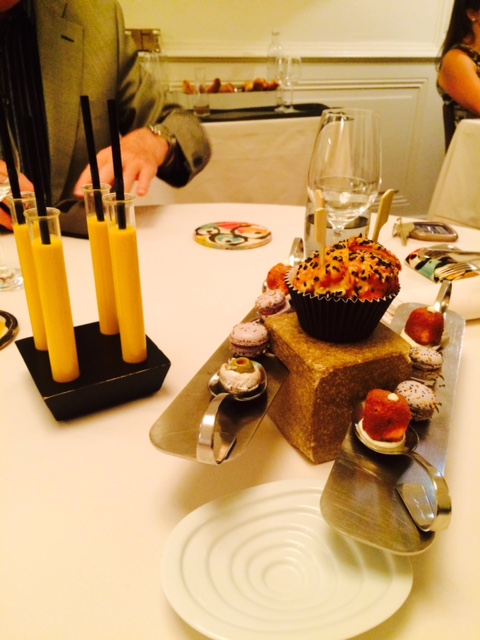 Nearly every menu on our gastronomic tour included guilt-inducing (duck) foie-gras or duck breast. (For the record, I never actively order foie gras, but nor do I like it to go waste.) My guilt was only slightly assuaged when it came playfully disguised as mauve macarons amuses-bouches, as if to sugarcoat the unethical.

After dinner, Head Chef Oscar Garcia (protégé of Carcassonne’s Franck Putelat) tells me he’s the youngest chef to have won a Michelin star at the tender age of 23, two years ago. Despite markedly young waiters too, service is good. An even tinier savoury mauve macaron is served at the Domaine de Verchant ­– an achingly hip five-star hotel outside Montpellier, where haughty beauty seems to be a prerequisite for staff; and bling gull-wing convertibles a must for guests, judging by the carpark.

Sadly this tiny ‘fun’ fondant proves to be the meal’s highlight, because Chef has opted to cater for a large on-site pool party instead of the main restaurant on the night of our stay. We can only assume he left a junior apprentice at the stoves, after an hour-long wait for our starter, followed by a woefully undercooked lozenge of white fish. We assume the overwhelmed apprentice sloped off early to join the pool party as the fig and strawberry dessert (thrown with skid-mark abandon across the plate) was both lukewarm and rancid. I battle to see how such car-crash cuisine equates to the €350–€800 nightly room rates.

All hail a chef with genuine talent: Jérôme Nutile, whose eponymous venture opened this year on the outskirts of the Roman city of Nîmes. Nutile is “one to watch” having held two Michelin stars at the celebrated Hostellerie le Castellas in Collias, before striking out solo this year. Our waiters at Restaurant Jérôme Nutile were slick and charming; Nutile’s wife herself ushered us to our immaculately starched table. More foie gras… (as Carl Jung sagely said: “What you resist, persists”) – this time pan-fried with roast shitake mushrooms to start. Its rich buttery texture had our French friends ooh-la-la-ing; but I was enviously eyeing a vegetarian companion’s altogether lighter tomatoes ‘in three colours’, its burrata panna cotta garnished in a floral flourish.

Salmon and scallops with creamy polenta followed, with a side dish of ‘Pieds de moutons’ mushrooms. A fragrant glass of local Uzès-grown white Pays d’Oc Arpillus from the Domaine Deleuzen Rochetin helped cut through its richness. Unfortunately we didn’t step inside the restaurant’s centre-piece: A glass-sided cheese tardis with umpteen fromages dotted along its illuminated shelves. Our Menu Retour du Marché, and tummy capacity, didn’t allow for it (fromage à la carte is €22).

Pudding was a martini glassful of tangy lime ripple and cream topped with meringue droplets, which I barely finished having devoured the bread basket. With à la carte starters from €35 (steep when you remember the stars have yet to actually rain down), it’s worth opting for the set three-course menu from €62, or even the €160 six-course tasting blowout. Lunchtime at Nutile’s buzzing new Bistr’AU next door is frequently fully-booked – hardly surprising, given the amazing-value €18 two-course Menu du Jour, as long as you don’t mind the room’s stark modern décor.

After lunch, I ask Nutile when we can expect news of his two- or three Michelin stars. His twinkily reply is: “One would be a start!” 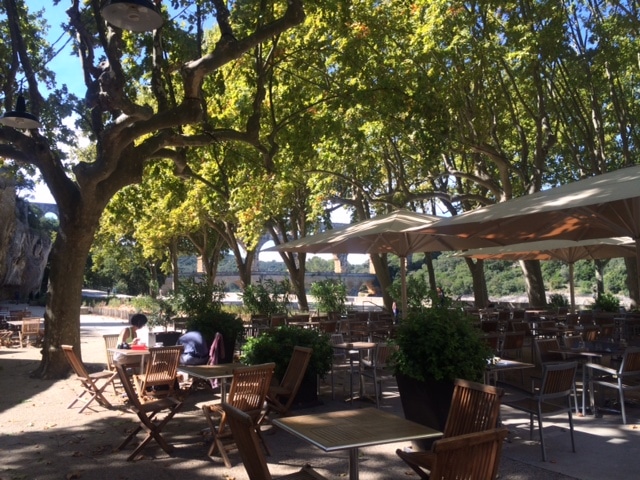 However, our trip to the UNESCO World Heritage ‘Pont du Gard’ aqueduct 23kms from Nîmes made up for it: This 2,000-year old colossus (50metres high, built over three levels) is the tallest surviving aqueduct built by the Romans. It enabled water to flow from the Uzès’ Eure spring, sealing Nîmes’ status as a key Roman city.

Our small party felt privileged to walk along the top water channel – normally closed to the public, except by special arrangement. After admiring the lofty views, we sat down to lunch on the ‘right bank’ at the waterfront Restaurant Les Terrasses. The menu was varied, from grilled fish, to juicy burgers and salmon steak salads, so we felt fortified for the interactive museum. 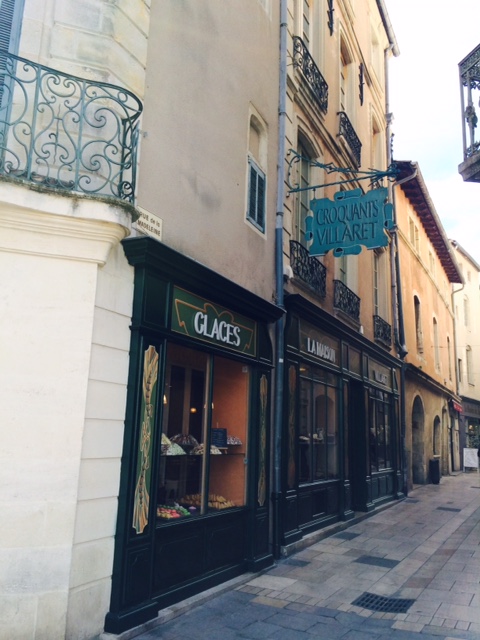 Nîmes may be the origin of Levi Strauss denim (“de Nîmes”), but that’s just an atom of what this photogenic Roman city has to offer. Passing patisserie La Maison Villaret (famed for its almondy ‘Croquants’ biscuits), we ambled through the busy indoor market Les Halles peddling fruit, vegetables, meat, fish, cheeses and olives.

We had a quick look around the ‘Museum of old Nîmes’ in the former 17th century episcopal palace, blinked at the newly-restored icon La Maison Carrée (Square House), and the finale: Stepped back to Roman times in the formidably well-preserved Ampitheatre; Nîmes’ answer to Rome’s Colosseum. All in a morning!

Our gourmet trip culminated in a superb lunch at the Côté Mas brasserie at the Domaine de Nicole vineyard (Château Paul Mass), with a vineyard tour on horseback, thanks to their new stableyard. Yet we only scratched the surface of this extraordinarily varied region: Having only sped past the pink flamingoes outside the walled city of Aigues-Mortes, a return visit is on my list.

So too is Van Gogh’s beloved Arles; arty Collioure; the Canal du Midi; Carcassonne; Perpignan; antiques-filled Pézenas and the oysters of Sète and Béziers. Top priority will be Uzès’ Saturday market, where I plan to fill a gigantic suitcase with dreamy Fougasse. When stopped by Customs with the question “Anything to declare?” I’ll reply: “Nothing that la Dough-ane doesn’t allow, monsieur (boom boom).” If he’s inevitably not impressed with my cheeky pun, I’ll offer him a bite of Fougasse, and as its doughy deliciousness befuddles his brain, I’ll make a run for it.

Read more from Annabelle Hood at her website, Luxury Journalist.