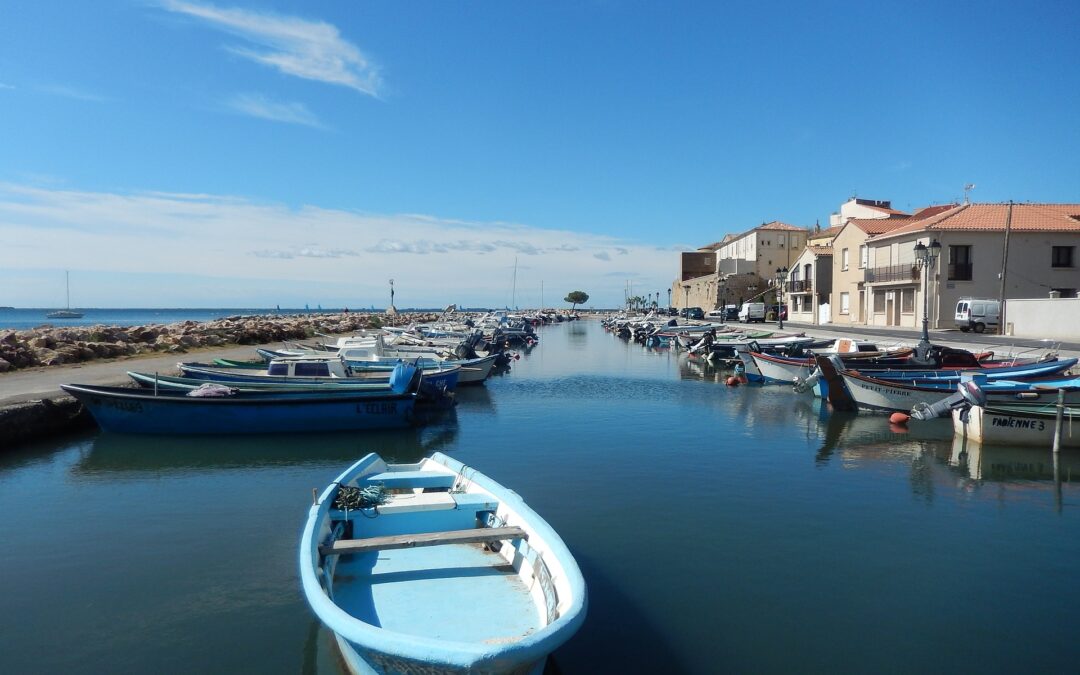 On the west side of Montpellier is a city that lives on the edge of the Etang de Thau. Mèze, a new tourist destination, has developed and embellished at a rapid pace these last few years, constantly renovating its seafront promenades, harbour, and old centre.

It is now an attractive town of more than 10,000 inhabitants that still keeps its village appearance, with locals waving at each other, chatting in the weekly markets, and joining in many festivals. Arriving by car from Montpellier is already a magnificent sight, with a panoramic view on the famous oyster parks of Bouzigues, an image which is on many tourist postcards.

Entering Mèze, turn left at the first roundabout and park at the Tambourin car park. Nearby, the ground welcomed last year international teams that played tamburello, not a musical instrument as one might think, but what was created by a cooper from Mèze in 1861 and used for a local sport. It was originally made with a wooden body and a goatskin head.

Start walking on the path along the Etang de Thau, in this place where many locals gather to play pétanque, or where fishermen hang their nets at the end of the day. All along the Petit Port des Nacelles, you will see colorful little boats, and behind you cannot help but gaze at the Mont Saint Clair. On your right side appears the Chapelle des Pénitents above the city walls, where the fisherman’s festival is held in June. Continue along the promenade and step on the beach called La Plagette through to the capitainerie that you will bypass. Not far from there, the tiny lighthouse has been restored.

Now, walk along the bigger harbour of Mèze until reaching the other side. This marina also welcomes traditional games of joust during summer and is populated by many restaurants and cafés. If you have time, stop to taste local seafood, or just for a cup of coffee. You will then arrive on the Promenade Thomas Bessière and the Place des Tonneliers, recently renovated and renamed in tribute to the old cooperage of the town. On your right side, the huge car park is full during summer, and if you turn around you will distinguish the old Mèze and its bell tower.

Continue on the Thalassa Beach next to the holiday residences.

After La Paillote restaurant, turn right along the tennis courts, and then left to arrive on another promenade, called the Sentier de l’Etang. It further becomes the Promenade du Sergent Navarro. Below crystal clear water where we just want to dive in is a rich marine environment. Besides, a lot of people practice water sports there, sailing, stand up paddle, among others.

Still on the promenade, turn left to follow the Etang on a small dirt track to a protected area called the Conque. Cross two small bridges, and you will discover pink flamingos and herons hiding in this sheltered and quiet bay. Further away you will spot the Mas of the Mourre Blanc, a site where oysters and other shellfish are being cultivated, an important tradition for the economy and cultural identity of Mèze. Continue on this same track that turns on the right, alongside tall plants.

From there, you are approximately halfway, so either turn round or follow the rest of the itinerary. After the track, turn left on the Route des Salins in the direction of the Ecosite, an ecological alternative for wastewater treatment, and then turn right, still following the same direction. You will pass parked cars and arrive on a dirt track in the countryside. At the first intersection, turn right. You will walk past a flock of sheep on your left and horses on your right. This itinerary bypasses the Ecosite.

Continue on the Chemin de la Rouquette and always go straight away through the houses. Continue on the Rue des Adieux, a road that goes along the cemetery, and walk by a place where olive trees and cypress form a quiet haven where you can have a rest. From there, walk on the bike path until you meet the Avenue du Général Leclerc that you will follow on your left side. Continue straight away on the following roundabout and take the direction of the city center.

Return to the harbor that will appear on your right side and find the small street called Rue Mathieu to go up to the Place de l’Ancienne Mairie. If you feel adventurous and want to visit the old center, you can easily get lost in this labyrinth of narrow streets. But to return to the point of departure, take the Rue Danton to the actual town hall, and turn right to get to the esplanade, which was also renovated in 2007. A TV movie about Georges Brassens’ life, La mauvaise réputation, was filmed on this location. Its covered market, plane trees and music kiosk are typical of most southern France towns.

Finally, walk towards the Château Girard. With a French garden restored to its origin, it is such a peaceful place to sit on a bench or let the children play. Take the exit Rue Ronzier, walk to the end of the street and on your left you will find the Tambourin car park.

How to get there: from Montpellier, take the A9 and exit in Sète, or take the RN113, and follow the direction of Mèze. There is also a shuttle from Montpellier airport or from the train station.
Level: easy / beginner
Duration: 2h to 2h30 walk.
Avoid summer time.

You can discover more about life around this coastline and the Etangs by booking one of Renestance’s Real Estate and Real Life tours.

All articles by: Staff Writer