If Music be the food of love, Drink On!

Food and wine are intrinsically linked in France, and part of a new life here should include being able to talk about either of them at any time! With Valentine’s Day approaching, this week’s blog by Kate Wardell puts an entertaining twist on the links between music and wine.

“It’s a funny thing, trying to describe wine. When you’re put on the spot and you don’t have an armoury of technical vocabulary at your disposal, what do you say? Hmmm that’s ‘nice’ will, I’ve found, often earn you an eyeroll and a deep sigh! So imagine my delight when during a recent conversation with a winemaker with a musical bent, we decided we could form correlations between our two great loves!

Not on my wavelength yet? Ok, try this. Let’s take Syrah, or Shiraz as an example. It’s widely grown all over the Languedoc, despite not actually being a native to this region (It comes from the Northern Côte de Rhone) and of course, it’s planted all over the world. And although you can often find key characteristics that help you recognise that what’s in your glass is, in fact, Syrah, you seldom find 3 examples that resonate on your palate in the same way; and it’s the same with music.

If we take arguably the 3 most famous tenors known to the masses, Placido Domingo, José Carreras, and Luciano Pavarotti. All three sing in the same range, all sing the same operatic parts, all have beautiful voices, and yet all three are different, and you can tell them apart. Grapes are the same! Shiraz from the Yarra Valley in Australia is no less a syrah than a Guigal from Cote Rotie, they are the same – yet completely different.

And this, gentle reader, is why buying wines based purely on the variety of the grape, is such a game of viticultural roulette.

Often, on tours, I’ll ask where everyone is from. The answers may be as wide reaching as Minnesota, Scotland, and Australia. So I put it to my guests, that if I gave them each a Syrah vine to take home and cultivate, would they all grow the same? Fruit the same? Taste the same? Of course not, so why do we buy wine that proudly states nothing but the name of the varietal? That’s a bit like saying you like all disco music, when we all know it’s a huge leap from the Bee Gees to Kool and The Gang!

Let’s look at a few more ways to relate grapes to wine in a musical context. The heavy weights of Bordeaux could arguably be compared to the maestros of the classical world – think of your Cabernet Sauvignon, Merlot, and Cabernet Franc as the Bach, Brahms and Beethoven of the viniferous world; serious, resonant, and powerful whereas your Pinot Noir and Gamay are perhaps more akin to Debussy or St Saens. If classical music isn’t your bag, well, there are comparisons to be made elsewhere in the musical world.

In the Languedoc we have wonderful varietals that few people outside the region (and maybe even inside!) have ever heard of. Riveirenc, Oeillade and Aramon are those kind of cool indie bands that your friend tips you off about, and you get that smug feeling that you’ve accidentally stumbled across the ‘next big thing’ before anyone else. The truly brilliant aspect of this is that in fact, these most of these varietals have been around for centuries, just being quietly brilliant, and just out of the spotlight. But let’s look again at the better known grapes and how they shape up to a musical reference.

The perennial summertime favourite – Sauvignon Blanc. Now, I’m going to struggle a bit with this one. Principally because in general, I’m not a huge fan of Sauvignon grown in Languedoc. With one or two notable exceptions, Sauvignon finds it too hot here, which means that although I want to love it ( I mean jeez, two glasses of Menetou Salon, and I become most amenable! ) I’m often disappointed. Kind of like my musical relationship with Leonard Cohen. I know he was brilliant, and a couple of his songs really resonate with me, but I’m not entirely sure I could sit through a whole album. But give me a Sauvignon from the Loire (see previous comment about Menetou Salon), and then it’s a whole different ball game. For me, that’s as joyous experience as sitting through an entire night of – well just pick your favourite singer!

Carignan, possibly the defining ‘character’ grape of the region is another tricky one. Notorious in it’s heyday for turning out an enormous quantity of pretty average wine – you can draw your own musical analogy – but latterly, growing into a consummate performer, with a couple of songs that have undoubtedly made it onto a playlist or two.

As I’ve mentioned both Syrah and Carignan, it seems churlish to exclude Grenache; often viewed as the third part of the holy trinity of red wines in the Languedoc. For me, Grenache is frequently the people pleaser of grapes. Packed with personality, it works as well in a team as it does on it’s own, so musically, I guess Grenache is my George Harrison. I adore it when it takes a supporting role, adding roundness and harmony, but I’m also rather fond of it’s solo work, and it’s a shame that it’s ability to produce a single varietal wine of outstanding quality is sometimes overshadowed by its role in a blend.

Funnily enough, I was at the Fête de St Vincent yesterday. For the uninitiated, St Vincent is the patron saint of wine, and so given we are in wine country, it’s the perfect excuse for a party. So I joined around 300 people, for a 5 course lunch, and wonderful wines at the Prosper Montagé Hall in Carcassonne. I happened to be sat at a table with a dear American friend, who I told about this blog, and her reaction was brilliant. We were drinking Cremant de Limoux at the time, the revered sparkling wine, made just to the South West of Carcassonne. ” I get it”, she told me, ” This is Chopin’s Spring Waltz in a glass ” Perfect.

So there you have it. Of course, music is as subjective as wine! And I’m sure you’ll disagree with some, perhaps all, of my analogies, and that’s perfectly ok. Not everyone can listen to Def Leppard, nor drink a glass of Picpoul, with as much unbridled joy as me ? 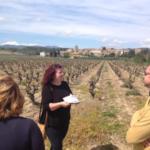 This article originally appeared on Kate’s personal blog Flight of the Wines Poured. Kate is a hospitality graduate and dedicated foodie who loves to combine this passion with her other great love, wine. Along with the rest of the Vin en Vacances team she shares a great respect for the wine makers of the Languedoc-Roussillon and the wines they produce. Laughter is the name of the game with Kate; and she will delight in sharing her food & wine pairing ideas with you too.