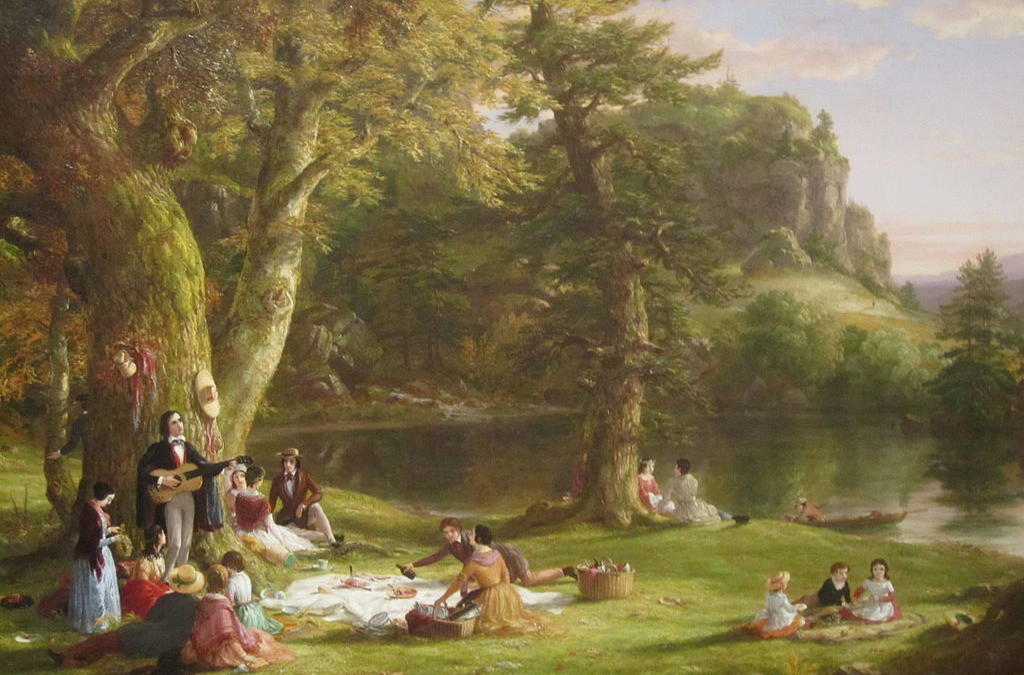 If you’ve ever driven in France, you’ve probably noticed groups of people sitting around tables by the side of the road, seemingly grabbing a quick bite to eat as a welcome rest stop to break up a long journey. Well, it’s not quite as simple as that! The French ‘pique-nique’ is a fine-tuned, well-planned and sophisticated affair! Not for our Gallic friends a quick sliced bread sandwich bought from a motorway service station! Let me tell you more about this area of French epicurean tradition…

As with many of our English words, the term ‘picnic’ came from the French, ‘pique-nique’ – dating back to the late 1600s, and used to describe those who brought their own wine when dining out in restaurants. (Well, that idea is still going strong!) However, the concept of actual ‘outside eating’ probably dates back as far as the Middle Ages, when the middle classes adopted hunting as their leisure pursuit. Extravagant feasts were laid out, with the lucky entitled ones being waited on by servants. And this remained the norm until the Victorian age, by which time the British had adopted the anglicized word ‘picnic’ and the famous Mrs Beeton (who was the first British ‘celebrity chef’ and cookbook author) brought the concept to the masses with her instructions as to how to hold a picnic in her Book of Household Management. 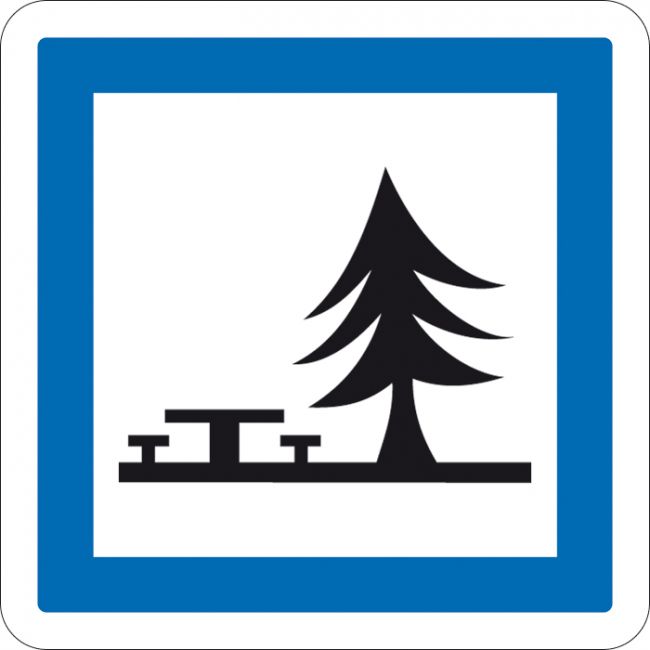 Where do the French enjoy their ‘pique-niques’?

Have you seen these signs by the side of motorways or major roads? They denote that there is a dedicated picnic area to stop and enjoy your lunch. They will usually have wooden picnic tables with benches, and often have a fixed toilet block and some even have a barbecue station or two!

You find yourself walking around a typical French market and the morning is coming to an end, when suddenly you notice, as the local clock tower strikes noon, that the market has become quieter. On closer inspection, you see market traders setting up behind their stalls a small folding table and chairs, adding a tablecloth and then laying it carefully with wine glasses, crockery and cutlery, followed by an array of delicious dishes! The midday meal deserves this respect, wherever you are, and you won’t find the French market traders eating on their feet!

The picnic is often on a grander scale here as the whole family is involved on a day out, perfectly pre-planned to the most minute detail! One or several larger folding tables, a chair for everyone, the ubiquitous ‘nappe’ (tablecloth) and again, china crockery, silverware and condiments.

Even agricultural workers or hunters will plan ahead for their midday pause. Perhaps ‘sans table’, they will however, find a place such as a rocky outcrop, or the wheel of their tractor, to perch themselves and their lunch in a dignified manner to eat their baguette, pâté, cheese and drink their wine. Yes, even in such rudimentary conditions, the wine cannot be omitted! 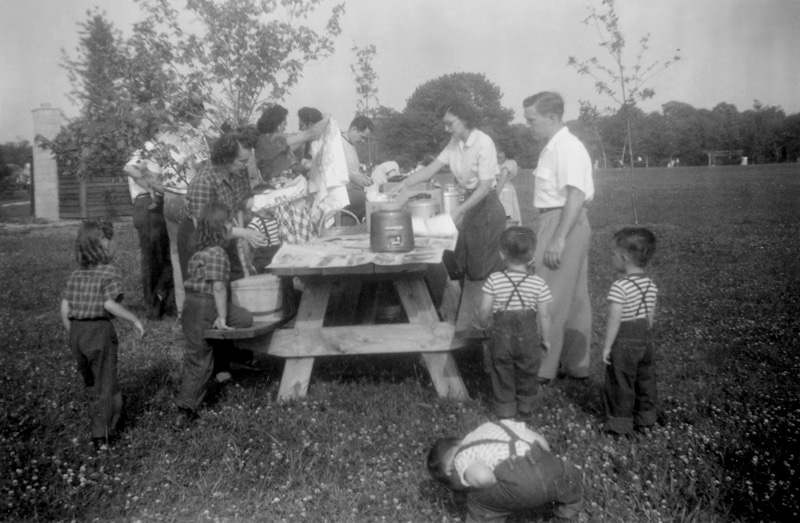 So what do the French eat on a pique-nique?

The meal will, of course, follow the traditional format of ‘entrée’ (starter), ‘plat’ (main course), ‘fromage’ (cheese) and ‘dessert’, accompanied by the chosen preferred wine. If you are installed nearby, you can stare in wonder from behind the pages of your book as they open their ice-boxes and pull out a seemingly endless stream of home-made goodies! The ubiquitous baguette takes pride of place on the table; then the wine is poured and the bread is ceremoniously broken (one never cuts the bread at a French table!), eaten accompanied by pâté, pickles, ‘charcuterie’ (cured meats) and melon, to the background of cheerful banter.

As the next course comes around, you’ll see bowls of colourful salads, pre-prepared dishes such as ratatouille, tabbouleh, crunchy beans, more cold cuts of meat or fish (if they haven’t lit the barbie to cook their main course in situ!). If you haven’t finished your book by the time the second course has concluded, to the sound of slightly more joyous banter now, you’ll see the table cleared away, ready for the cheese course. Often eaten with grapes or even green salad, the table will usually be presented with a hard cheese such as Compté, Beaufort or Cantal, along with a blue such as Roquefort or a Bleu d’Auvergne and a ‘chèvre’ (a soft goat cheese). 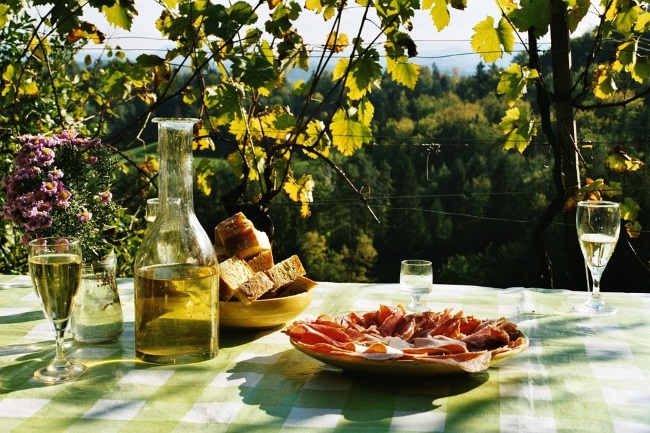 Assuming you haven’t left your sunbathing spot to go and find something to eat yourself by now as all this gastronomic wonderment has left you salivating, you’ll see the penultimate course of dessert served. Think brightly-coloured strawberry or apricot tarts, or fresh seasonal fruit such as peaches, nectarines, strawberries, more melon, all cut in the hand over the same plate used for the rest of the meal, but wiped clean after each course with a ‘morceau de pain’ (piece of bread).

No meal in France would be complete without a coffee! And we are not talking a mug of milky instant here (one only has milk in one’s coffee first thing in the morning; after that it’s black all the way!)! A thermos will appear as if by magic and little espresso cups will be poured and passed around the adults, along with little spoons and a bowl of sugar cubes.

When you come back from sating your own hunger, you’ll probably arrive to the menfolk taking a digestive ‘sieste’ whilst the ladies clear up – traditionalists to the end!