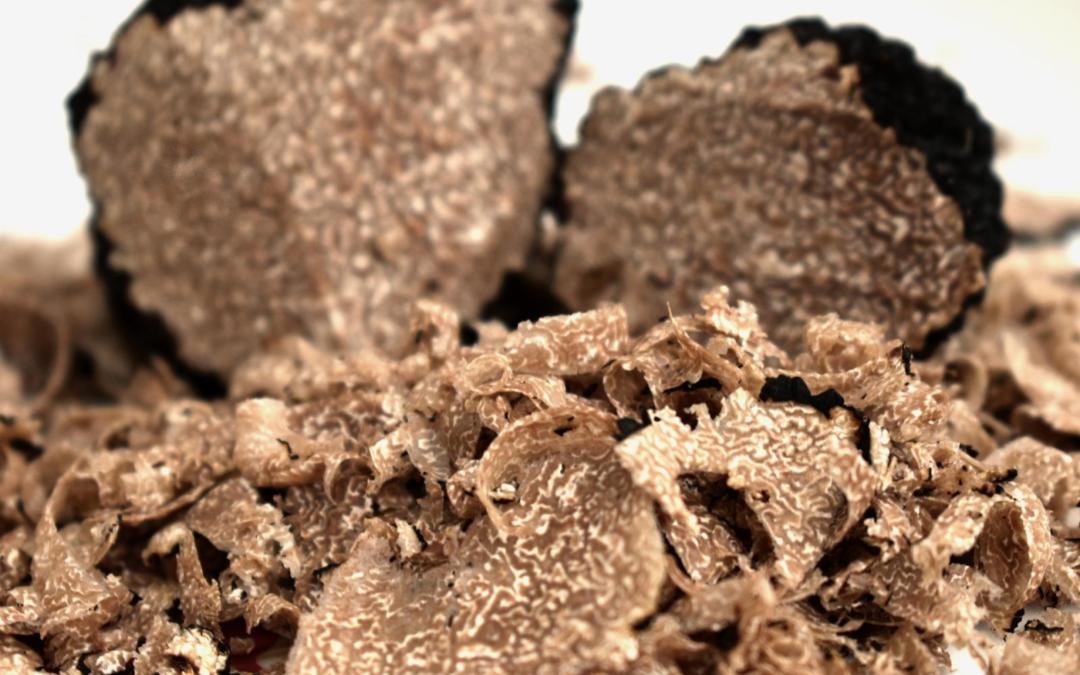 French cuisine is world renowned and largely due to the value placed on high-quality individual ingredients. There are food fairs throughout the year celebrating everything from potatoes to pigs, and right now it’s truffle season. Make no mistake, the “black princess” is the crown jewel of French cuisine. There are many fairs dedicated to truffles in Languedoc-Roussillon between December and March, and Ira Faro wrote about his visit to one with his wife Cathey in his blog France, Food, Scooters and More. 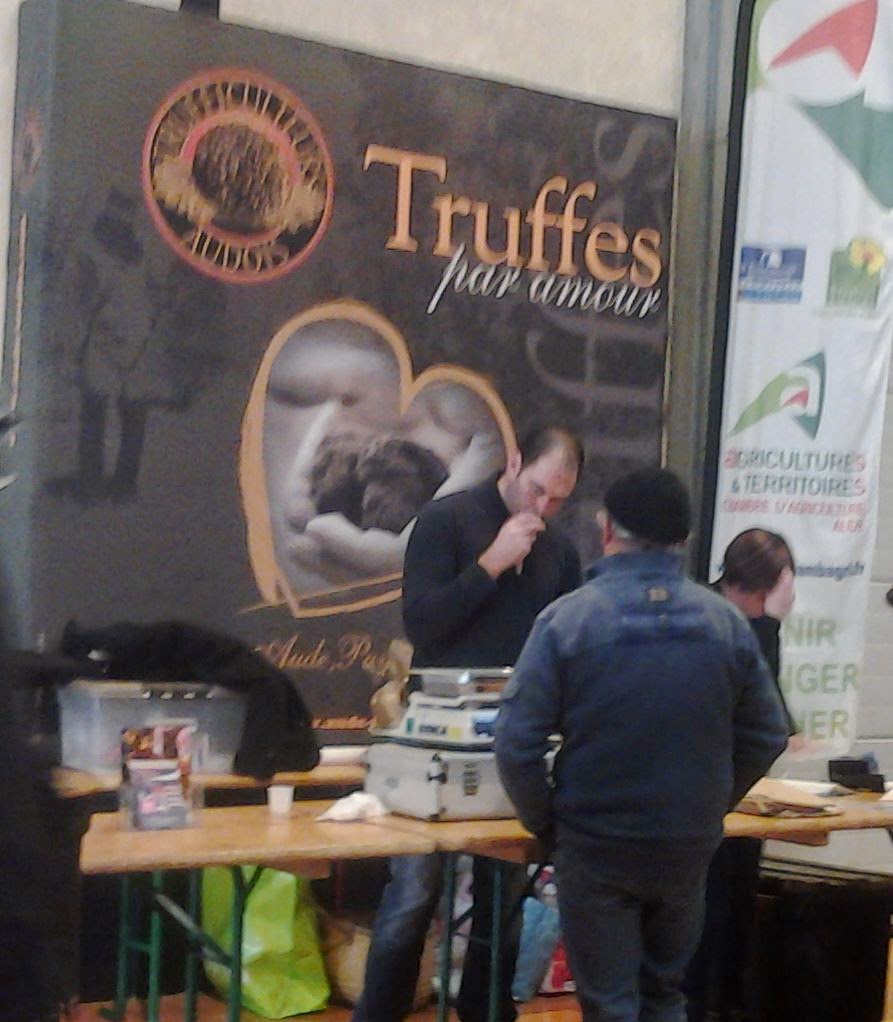 Recently, I learned that the season for truffle fairs had arrived. Is it any surprise that my wife Cathey knew this? The surprise, I suppose, is that Cathey would be interested and that I proposed without any prodding that we visit the truffle fair in Villeneuve Minervois, a small town in the foothills of the Massif Central about an hour north and west of us here in Quarante.
We arrived at the salle polyvalente (community room) at about 10am. Just about every village has one of these multi-purpose spaces. A market was already in full swing. Tables displaying wine, artisan whisky, saffron and saffron-infused products, truffle-infused butter and brie, artisan chocolate and cheeses and sausages, and knives and other gadgets. After a quick circuit and tastings, we had purchased two bottles of sparkling Limoux wine and a couple of hunks of chocolate, both white and dark, both with bits of raspberries. I thoroughly enjoyed my sip of Black Mountain, very smooth artisan whiskey. No sale, though. I’m a bourbon man myself.

But the reason for the festivities are the truffles. Truffles are a gourmet’s delight. I will simply say two things: that we are talking here about the French black winter truffle, tuber mélanosporum, and that if you enjoy mushrooms, truffles are kind of like mushrooms to the nth degree. At a cooking demonstration under a small tent with perhaps 50 chairs lined up, the audience was standing room only. 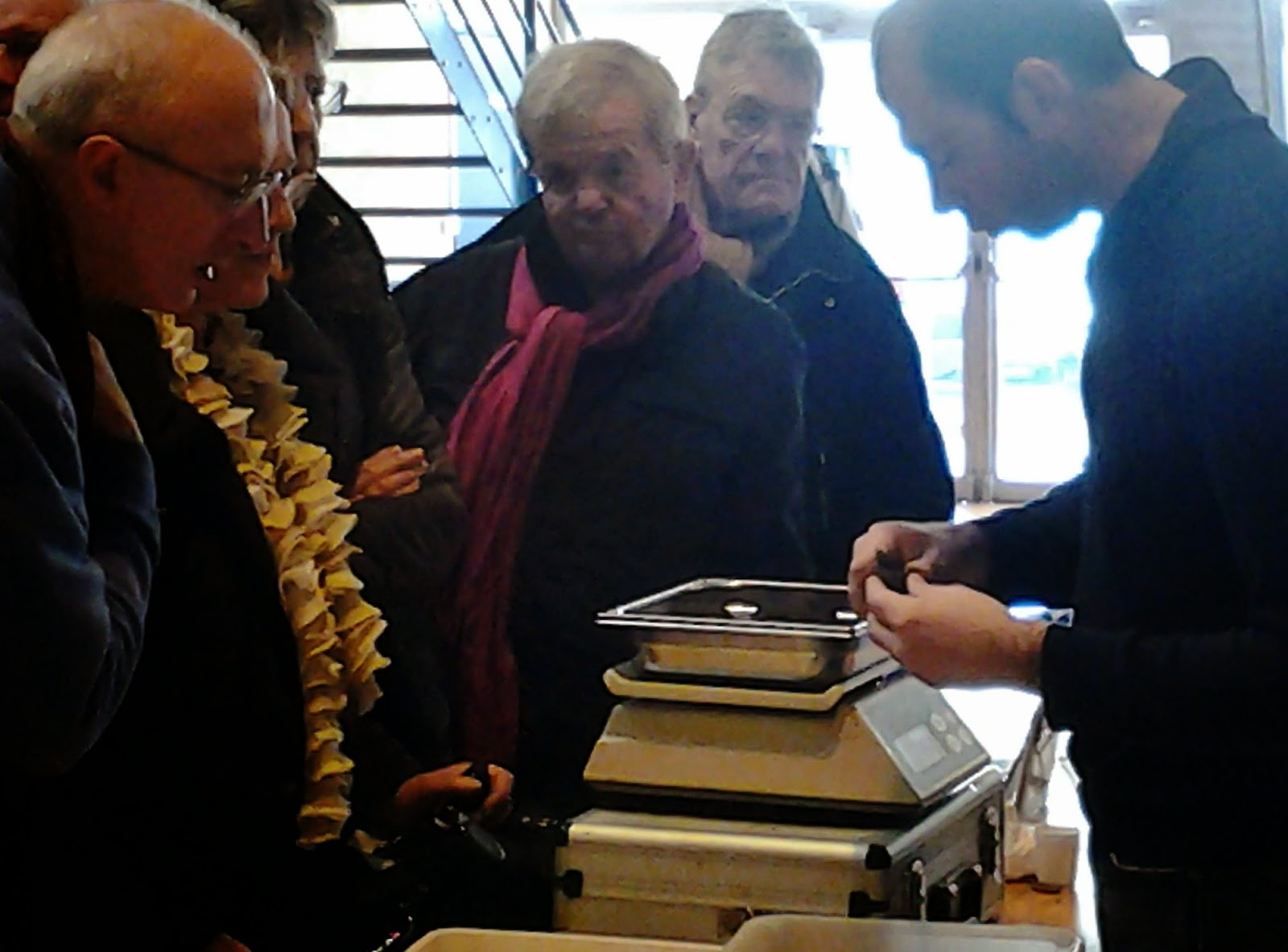 The truffle foragers arrive with their musky little treasures in baskets, in glass jars, or in plastic containers. They present their finds to an examiner stationed by the entrance who represents the French Department of Agriculture as well as the local Brotherhood of the Truffle. The examiner assesses every single truffle, sharp knife in hand, carefully shaving and smelling. If the truffle passes muster, it goes in a bin on the examiner’s scale. If it doesn’t, it’s added to a pile of rejects under the examiner’s table. The truffles are then placed in a cloth bag, tied securely, sealed, and handed back to the forager.

The foragers took their approved hauls to a long table at one end of the hall, separated from the crowd by a waist-high rope. A gent with a rifle, one of the Brothers, patrolled the stage above. When all of the day’s truffles had been examined, the examiner walked down the line to each forager’s station, cutting open the seals of the cloth bags and pouring the contents into whatever display container that the forager had set up. Some of the forager’s displays were quite fancy. Some foragers simply used the plastic containers that their truffles had arrived in. Every station had its own scale. When the examiner had opened and poured out the last bag, and without any warning, the Brother on the stage fired off a loud blank. (I hope that it was a blank.) The rope dropped. The stampede began.

I knew then why there had been such a crowd around the examiner’s station by the door. Folks were scoping out the batches they thought looked the best, watching and listening to the examiner. So when the rope dropped, they hustled to purchase the truffles that they’d targeted. We weren’t so focused. We simply walked up to the lady at one end of the table, watched the two ladies ahead of us pick up and smell each and every one of her truffles before purchasing two, then repeated the exercise for ourselves. She put one small truffle of 14 grams in a cellophane bag for us – 11 Euros. That’s right. 11 Euros for a fresh French winter truffle weighing one-half ounce. We were amazed. We would have paid at least four times as much in the States, probably more. At that price, we could afford another. We were more discriminating and walked down the table slowly, eyeing each display. We picked another truffle of 16 grams out of a cute little basket lined with red fabric. 12 Euros. Damn.

One final note. Cathey rhapsodized over the smell of truffles that she said pervaded the salle polyvalente. I frankly didn’t notice it. But when friends popped by our house the day after the fair for a visit, Cathey brought out the jar and opened it to give them a whiff. And from the other end of the table the fragrance of the truffles wafted over to me. Unmistakable.

This version of the original post Truffles – French Black Winter Truffles, which first appeared here, was edited with permission from the author.