13 French Things You Didn’t Know You Had to Translate 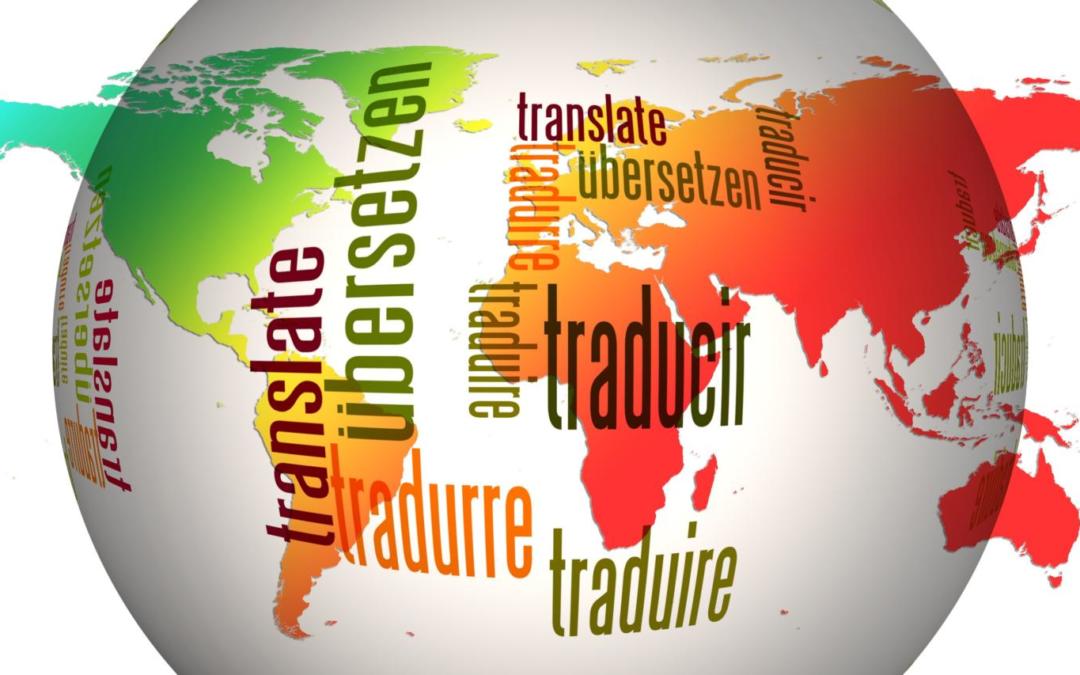 You know you’ll have to do a lot of translating when you go to a foreign country. We used to look like idiots flipping through little phrase books, but now our smartphones are bona fide interpreters waiting in our pockets. Before you are too relieved and complacent, however, there are several things the language app on your phone will not be able to translate for you in France.

It’s logical that words would be different in a foreign language, but surely the numbers should be the same, right? Well they are when they’re typed, but French children learn to write numbers much differently than we do. The 1 has a long tail in front, making it look like a 7, the 4 loops down, looking like a 6, the 7 is crossed, and the 9 is written with the curved line as when typed, not like a loop on a stick. Here’s one example for you:

The image above is also a good example of the different date format, as well. Notice that they write the date as day/month/year*. Putting the day before the month can be very hard to get used to and is the source of many errors. Be vigilant if your birthday is in the first twelve days of the month!

*OK, this is mostly a problem for Americans

Even when you know the word, it can be difficult to decrypt it if written by a French hand. You could miss out on something delicious, as many bistros hand-write their menus on a chalkboard. Here are a few examples of real French handwriting:

Can you decipher this? The P, Q, F and J all look similar.

And this? That first letter is a capital M in French cursive! And check out the L and T.

The handwriting of older generations is rather flowery, as they were taught to write with fountain pens and inkwells up until the late 1960s.

Even today, the French still place a lot of weight on penmanship, and school children are graded on it. I was shocked when our kids learned to write in cursive in pre-school!

Unless you’ve served in the military, taking a train at 16:30 is bound to confuse you. But the French systematically use the 24 hour clock in daily life, not just for official business. It can be difficult to get used to…after 17 years here, my brain still initially thinks 9 PM when I hear 19:00 (it’s 7 PM).

It’s no surprise that you’ll need to translate the currency for every price, if you’re coming from outside the euro-zone. One unexpected difference, however, is the way the French represent amounts of currency. They put the euro symbol at the end and indicate the thousands and decimals like this:

What can also startle you is when people refer to amounts in Francs. This usually happens with older French people, who will sometimes even speak in ‘ancien Francs,’ which was two currencies ago! 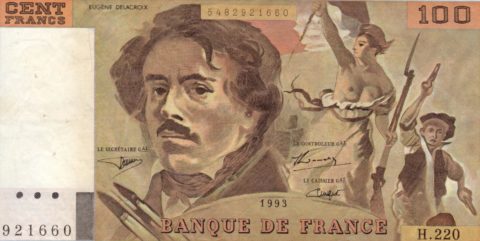 Shoes, Tops, Bottoms, Bras, Belts, Gloves, Children’s items…Do you know what sizes you wear in French clothes? You could cheat with your smartphone, but sometimes the item takes US sizes in inches. So when you go to a French store to buy some jeans, and the salesperson asks what size you’re looking for, your answer could be 26 or 36! Doing your homework beforehand (helpful link) will make you look like a seasoned Parisian shopper as you glide through the boutiques.

This is a double point, because we’re talking about grades in terms of school year as well as grades in terms of marks…because the French do both differently, of course. If you have school-aged children around, learn this tip so you’re not completely lost.

The easiest way to explain the school year equivalents is with a chart: 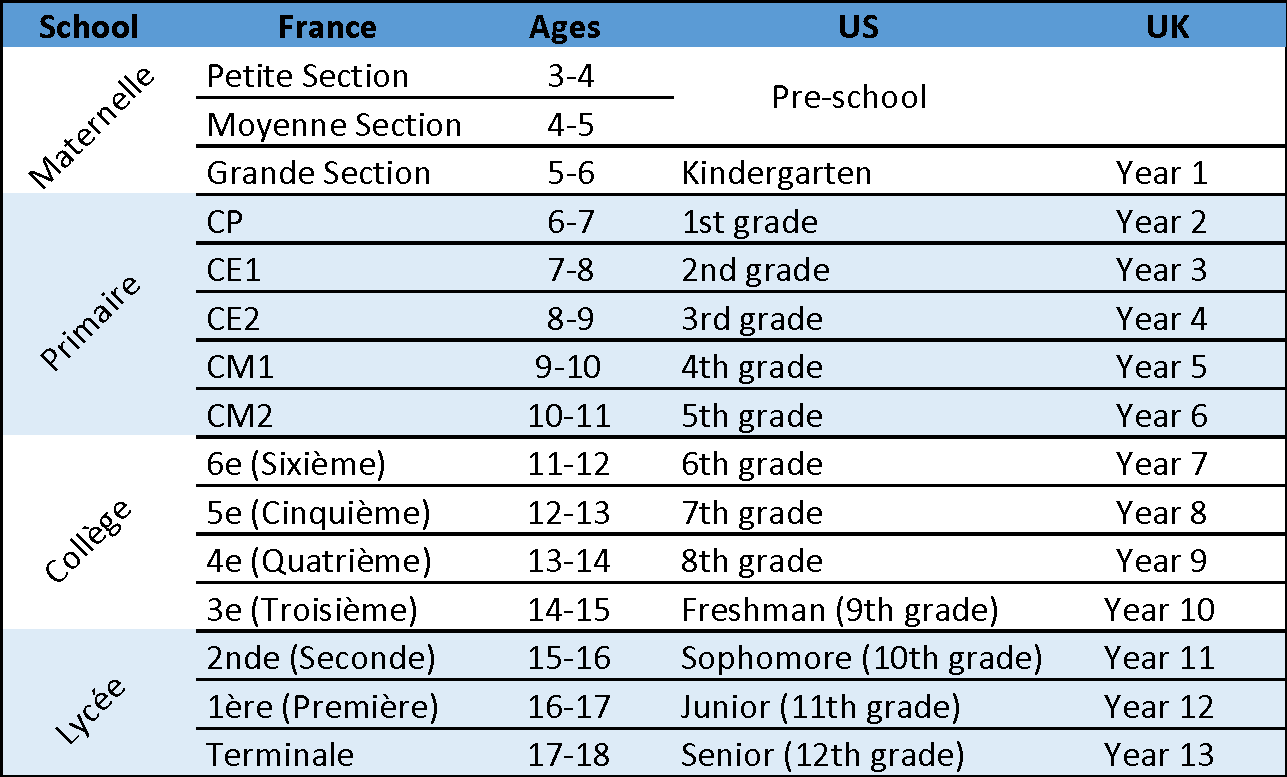 For marks/grades, the French use a 20-point grading scale, but it’s not as straightforward as you’d think. It’s commonly said that 20 is reserved for God, so basically 16 and above is considered an A. Don’t scream if your child comes home with a 10, which would be 50% or failing in the US system, because it’s actually the equivalent of a C in France.

Also a bit like currency, if you’re coming from a country that doesn’t use the metric system*, you won’t be surprised at having to do constant mental gymnastics to figure out measurement units for temperature, distance, quantity, and weight. Some measurements are so ingrained that we don’t think about their metric equivalent, however.

*Again, this is a bigger problem for Americans

What do you think of when you hear the words Do Re Mi? I’ll bet you €100 it’s the song from The Sound of Music. Well in France, that is the actual musical scale! You don’t sing something in the key of G, you sing it in “Sol”. Also, the note B is “Si” and not “Ti” (a drink with jam and bread). 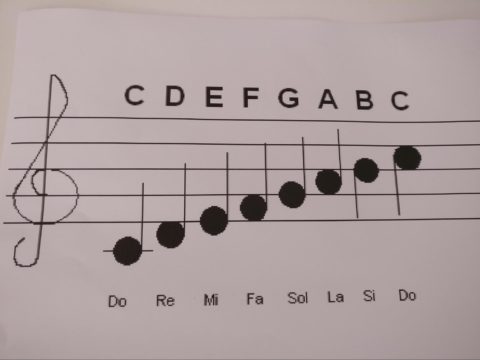 Some French noises you do learn when studying the language, like “aïe” for pain (ouch) or the famous reaction “oh la la”. But the French will make several sounds that have distinct meanings without corresponding to actual words.

And then of course there’s the whole list of onomatopoeias of animal and object noises. Someone at the door goes “toc toc”, but the phone goes “dring dring”. For the most part you can figure these out, but “pan-pan” for “bang-bang” and “plouf” for “splash” may not immediately occur to you.

One dead give-away that you’re not French is when you hold up your index finger to indicate the number 1. The French start counting with the thumb, so the thumbs-up gesture for us is the number 1 for them, thumb + index = 2, etc.

A gesture that means the opposite in French is the OK sign we make with our index and thumb, with the other fingers up. Be careful, because in France, this sign means zero and is used when something is worthless…or not at all OK!

One gesture that I misinterpreted for a long time was this: 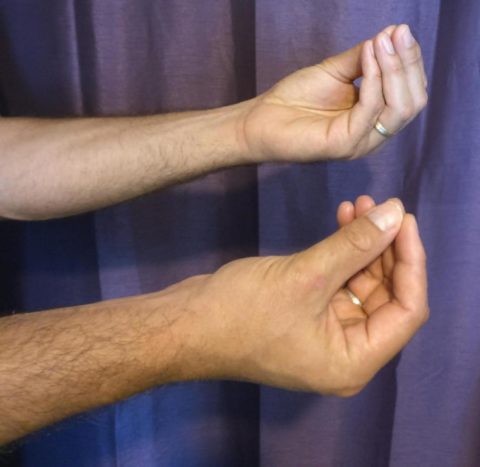 I thought it indicated money, or “moolah” like in Italian, but in French it actually means fear! Pourquoi? you ask. Because in previous generations, teachers punished school children by rapping their fingertips with a ruler, which made them say “aïe”.

Another funny gesture whose meaning is hard to guess is the two-fingers-in-the-nose. There’s an expression in French, “les doigts dans le nez” which is a bit like “with a hand tied behind my back”, meaning something that’s easy to do. So when a French person looks like they’re going to put their first two fingers in their nostrils, it’s to show something is simple.

There are many resources online to show other common French gestures (You Tube video), beyond the world-renown Gallic shrug, but the most fun is discovering them during live conversation. 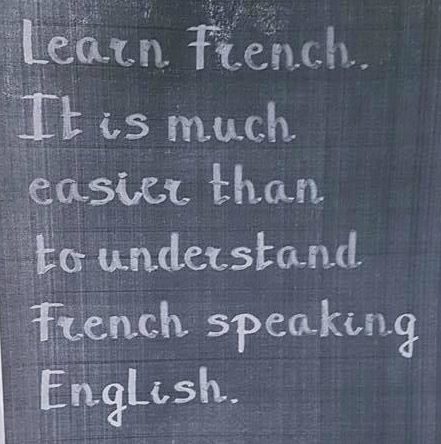 I must apologize to all the French I know who speak wonderful English, especially my dear husband. But I feel it would be a disservice to my fellow ‘Anglophones’ if I didn’t warn you about this last one. In fact, part two of this Lost in Traduction series will be a whole article on understanding French people speaking English, but I’ll just touch on one major aspect here…pronunciation. Admittedly, writing is not the best medium to tackle pronunciation, but I’ll try my best.

There are two main problems that the French have when forming English words: 1) pronouncing the letters like they do in French, and 2) putting the emphasis on the wrong syllable. You will likely be stunned by these immediately upon arrival, because contrary to the rumors, the French will try to speak English with you if they suspect it’s easier than struggling through your French. Only, you have probably not heard the English words pronounced quite that way…

Yes, there’s the classic French accent where they replace ‘Th’ with ‘Zz’. But there’s also the short ‘i’ sound, which doesn’t exist in French, and which causes beaucoup confusion. “I weel leeve” could mean ‘I will live’ or ‘I will leave.’ Their attempts at vulgar language can miss the mark, because we generally assume the Francophone is innocently talking about a sheet or the beach.

And the syllable mix-up is sometimes even more puzzling. In French words, the emphasis is always on the last syllable, but in English it jumps around with every word, making it very hard for non-native speakers. I’ll never forget the time a Frenchman was telling me about his favorite English actors, only I couldn’t figure out who Keer DooGLASS or MonTEE PeeTONE were (can you?**).

Final word of warning, these pronunciation challenges apply to your own name, too! Don’t get caught like the poor woman at the embassy, hearing “Madame ZheelBARE” called ten times before realizing that was her, Ms. Gilbert.

I hope this little primer helps you get up to speed with life in France, regardless of your language level. Stay tuned for more language and culture hacks on the Renestance blog.